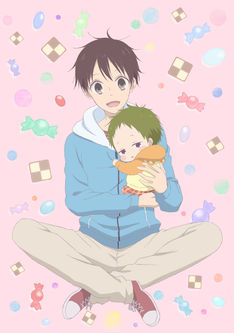 The May 2017 issue of LaLa magazine has announced on Thursday that Hari Tokeino's Gakuen Babysitters manga will get an anime adaptation.

Synopsis
After their parents are killed in a plane crash, Ryuuichi and his younger brother Kotarou are taken in by the chairman, who they never met before, of an elite academy. Ryuuichi becomes the school daycare's new babysitter. (Source: MU)

Gakuen Babysitters began its serialization in September 2009 in LaLa magazine. The series currently has 13 compiled volumes in print, with the 14th volume shipping on April 5. The manga previously received a drama CD adaptation in May 2011, with Ryuuichi Kashima voiced by Yuki Kaji (ClassicaLoid) and Kotarou Kashima voiced by Megumi Takamoto (Itsuka Tenma no Kuro Usagi).

This is going to be so adorable! I read the manga for a while... maybe I should pick it back up

I'm looking forward to the anime, the manga is really heart-warming, adorable and funny ^^

Yes!!! This is what I've been waiting for all this time!! I just know about this manga and plan to read it. But as far as I've heard this is gonna be a sweet anime. And those cute little babies!! Ugh!! Just seeing their pictures makes me melt away. We'll be able to see them talk with cute voice and watch them doing mischievous things. I think I'll melt and turn into vapour when the anime will come out!! Can't wait!!! \(>~<)/

Sweet yes I will watch. Yuki Kaji is more than perfect should stay for anime too please.
I can't wait for anime cast what if Hosoyan voices another ponytail omg I want.
Key visual looks so adorable I love the colors ♥

I LOVE this manga. This is exciting but I'm a bit worried about the babies' voice.

I have to wait a year D:
But this and Nukozuke! are some of the most adorable series out there

This looks actually pretty adorable. Lol. But I'm pretty much looking forward to it a bit. But we need staff announcements and all.

The funny thing is I put this manga on my plan to read list and I don't know when I can read this manga.I hope the anime adaptation will be good.

yes! finally, I was waiting for this, I hope they do a good job.

Uhh, I don't really like children so I doubt I will like this. I will see when it comes out.

It's as if you're not allowed to have both your parents alive in anime.

Another Batman syndrome anime? Well I will leave the decision based on MaL rating.

Been reading this manga for awhile and it's surprisingly good. Hope it will get a faithful adaptation!

Been meaning to read this manga so this is really good news :D