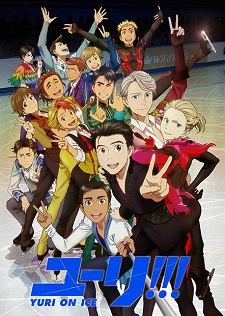 Winners of the Tokyo Anime Awards have been announced for 2017.

Animation of the Year
Koe no Katachi (Film)
Yuri!!! On Ice (Television)

do you know how hard it was to animate Victor’s ass coming out of the water?!

Bit of a late reply, but I just watched Koe no Katachi about a week ago and I have to say, I love how a lot of critics are recognizing how great it is. Shame that it's not as popular with everyone though. Case in point: The real talking point in this announcement is how it won over Kimi no Na Wa, but most people here focused on Yuri On Ice instead.

Oh my, the salt in this thread is delicious.

I'm surprised Kimi no Na wa didn't win actually. Can't wait to catch Koe no Katachi next month; I have a feeling I will like it more.

I thought only Crunchyroll was dumb enough for this. Oh well.

This guy hit it on the point than anybody could do.

Yuri no Ice - no comment on that anime. I dropped it after the third episode with a score of 4.....

Looks like Yuri on Ice! is really good anime because it got so many award! Gotta give it a shot!

petalshreds said:
daggerswithroses said:
Regardless, YoI didn't win because of the animation, it won because of the whole package it brought to the table obviously which is what "best animation" means. Its not about literal animation of the show, just a description of the type of show thats getting an award. It's a AOTY award by people who work in the industry.
If this is true, it makes most of the arguments in this thread look even funnier...

Some people are pretty dumb. If anyone bothered to look at the awards they'd realize there are no categories like that. These are the Tokyo Anime Awards and they are divided into "Best TV show" " best movie" "best director" "best writer" "fan award" ect. No one is being judged literally on how smooth their animation is.

daggerswithroses said:
Regardless, YoI didn't win because of the animation, it won because of the whole package it brought to the table obviously which is what "best animation" means. Its not about literal animation of the show, just a description of the type of show thats getting an award. It's a AOTY award by people who work in the industry.
If this is true, it makes most of the arguments in this thread look even funnier...

Disgusting, shinkai and kimi no na wa should have sweeped everything.

Lets hope that Tokyo Anime Award not become another Oscar who riding on hype.

Like seriously if YOI airing on Winter 2016-2017 they will not win anything, anything i told you.

AngelicTotoro said:
How about no? ^
The creator of YOI is already backpedaling on any sort of 'canon' lgbt representation, plus YOI never was a healthy or romantic example of a lgbt relationship in the first place. Queerbaiting should not be rewarded. End of story. I am tired of so many people acting like YOI must protected because 'IT HAZ MY GAYS.' Plenty of other anime came before it with superior writing and actual canon, no baiting bullshit.

There have been lgbt anime and relationships in anime since the 70s, sorry to break this to you, but it's true. Ever heard of Cutie Honey? Honestly.

kubo and otsuka, mappa staff, have called victor and yuuri soulmates a lot. doesn't sound like "backpedaling" to me.

Fai said:
NanoRin said:
@Fai The creators have said time and again how difficult the production process was and how much work had to go into each episode (which, spoiler alert, was a heck of a lot of work made even more difficult by time and budget constraints). Was the animation always consistent? No. Was it the best animation of the last year, objectively, probably not. Was animation sometimes sacrificed for fluidity and motion during the skating sequences, absolutely.

But you know what? When the animation was good, it was really, really damn good. Some of the skating scenes were animated breathtakingly well, which is a pretty difficult feat in and of itself. And you know what, I'm pretty darn tired of people tearing the show apart, using the same scenes and argument over and over and acting like it's animation was so darn bad and NEVER taking a moment to acknowledge the many good moments. So sure, what they aired on tv may not always have the best animation, it might not be up to par with your favorite battle shounens or whatever magic kyoani uses, but clearly there are people that enjoyed what YOI had to offer given the resources they had.

And nobody is saying animation was bad. It was uneven and production was a mess.Even the best parts were not THE best as you yourself admit. It was simply not something I see anyone giving the show awards over. In this case this felt more like popularity vote.


I'm not even touching the "progressiveness" issue. I'm too tired of it.

My advice to you and everyone else is this isn't the first or last time this is going to happen, so get over it, enjoy your shows and let other people enjoy theirs.
The irony of someone accusing a queer person with hating the show because of lgbt pairing is hilarious.

Progressive content does not suddenly excuse the issues the show had nor stop critique.

Victors 2 minute skating sequence was one of the most impressive (if not the most impressive) animation of the year. That kind of sustained motion for TV animation is ridiculous. Regardless, YoI didn't win because of the animation, it won because of the whole package it brought to the table obviously which is what "best animation" means. Its not about literal animation of the show, just a description of the type of show thats getting an award. It's a AOTY award by people who work in the industry.

Thebigofan said:
wow, so much salt in this thread about Yuri on Ice winning an award.

Haters are free to say whatever they want, but Eventhough million bad words come from haters, No one can beat the fact that Yuri on Ice is Truly The best & deserved those awards.

Thebigofan said:
wow, so much salt in this thread about Yuri on Ice winning an award.
That's because it beat better shows.

wow, so much salt in this thread about Yuri on Ice winning an award.

I haven't watch Yuri on Ice so I can't really comment on it but in my opinion, 2016 overall is bad year for anime. I can't really think of single anime that I really want to win the award.

Does anyone has the list of the others nominees?

The joke tells itself

I personally like Yuri on Ice as I think its pretty solid despite the glaring flaws the show has (the characters haven't really developed fully and the animation was a fucking mess) but being the "best animation" of the entire year is fucking bullshit in my opinion.

I haven't even caught up to Mob Psycho 100 but as far as I've seen from the anime the animation is probably the best of the year, aside from Flip Flappers too in my honest opinion.