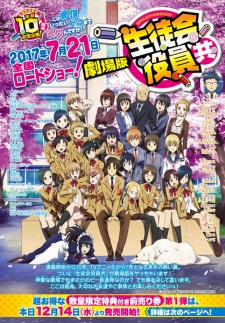 This year's second and third combined issue of Kodansha's Weekly Shounen Magazine announced on Wednesday that Tozen Ujiie's school comedy manga Seitokai Yakuindomo will receive an anime film. Commemorating the manga's 10th anniversary, the film is scheduled to premiere in theaters in Japan on July 21, 2017. Staff and cast members will reprise their roles from the previous anime seasons and original video episodes. KlockWorx will be distributing the film.

The first set of advance ticket sales has begun on Friday, which includes a mini shikishi board with illustrations by the manga author Tozen Ujiie. A second set of advance ticket sales including a school calendar will begin in March 2017, with a third wave planned for a later date. Customers will receive a different bonus item each week with new illustrations by Ujiie for the first four-week run of the film.

Ujiie launched the 4-koma manga in Kodansha's monthly Magazine Special in 2007, before it transferred to Weekly Shounen Magazine the following year. GoHands adapted the manga into two television anime seasons in 2010 and 2014. The manga also inspired eight original video episodes between April 2011 and October 2013. A second series of original video animation have been bundled with compiled manga volumes since May 2014. The 14th limited edition manga volume, which goes on sale on Friday, will bundle an original video episode.

Damn, the new movie will be only in DVD format and not BD?

Wow never expected this anime get a Movie...even it recap still gonna watch

a movie yes...I am o excited but it will be a while since we will be able to see it though

RachelAvery said:
Wow, I think this is the first 4 koma that managed to get adaptation this long, 2 seasons, 1 OVA series, a few OVA, OAD and Movie
To add to what Kuma said above, Hidamari Sketch has 4 seasons and multiple OVAs/specials.

RachelAvery said:
Wow, I think this is the first 4 koma that managed to get adaptation this long, 2 seasons, 1 OVA series, a few OVA, OAD and Movie

Wow, I think this is the first 4 koma that managed to get adaptation this long, 2 seasons, 1 OVA series, a few OVA, OAD and Movie

2 hours full of dirty jokes? Why not? xD
Though it's kinda the same joke with OVA?

shit,i just read this news right now. this is some good news man.
really...can't wait to see it xD

Okay, now everyone back off for a little bit! You're telling me SYD is back?! Well technically we still have one more OVA, but fuck yeah I'll take a movie.

"I want a Suzu" please! She's so cute and way normal.

It's time to re watch greatness

This should be amusing. I'm ready for all the jokes again.

Not bad, this is one of the few good comedy series that are actually funny even tho they rely too much on dirty jokes.

Will watch the movie a year from when it gets released.

Well this is just the best.

which arc will it adapted? or it will go original story? both are win win for me as long the joke still there... the real dirty joke is here baby...

The news of movie was surprising as I don't know how can it be made for a series like this with no story whatsoever.

But yeah, I'm really happy for the news.