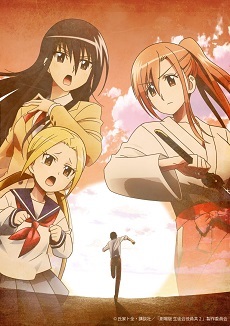 A second anime film for Tozen Ujiie's Seitokai Yakuindomo manga was announced by Kodansha on Friday. The film is scheduled to open in Japan on July 10, 2020. The first wave of advance ticket sales will begin on December 27, which will include a bonus item.

Voice actress Miho Okasaki (Tensei shitara Slime Datta Ken) will join the cast as the character Yuu Hirose. Cast members from the previous anime installments will reprise their roles in the film.

The 4-koma school comedy manga originally ran in Kodansha's monthly Magazine Special from May 2007 to June 2008 and subsequently switched to Weekly Shounen Magazine. Kodansha published the 18th volume on August 16, which bundled the 17th OVA episode. The 19th volume will ship with the 18th OVA episode on September 17, 2020.

Sentai Filmworks licensed both seasons and the anime film this September and will release all three installments on home video on December 10.

can't wait.......my second favourite slice of life-comedy anime after Barakamon.....
I still laugh no matter how many times I re-watch this show......just hilarious and awesome....total stress reliever

Dokizukeru said:
never watched it but I hear it has great comedy

can someone tell me how good the romance gets?

Watch it,its excellent.As for romance,theres a lot more innuendo than romance,but the jokes are hilarious.I don't think I've watched any other anime from season 1 through to the movie and ova's that hasn't made me laugh at every bloody episode.This deserves another season,but I'll happily take another movie and some ova's.
Just watch it,you hopefully won't regret it.
Btw,keep an eye out for the "Takatoshi and dried squid" bits,damn funny as all hell :)

never watched it but I hear it has great comedy

can someone tell me how good the romance gets?

This is real thing absolutely.

I welcome an eternal life in which SYD is all encompassing.

They better announce season 3 in the movie!

I would have preferred another season but this is also a HELL YEAH moment.

I heard that GoHands is on the brink of bankruptcy, so it is obvious that they will milk the only decent franchise they have.
Anyway, it's nice to see more shinoneta.

I'm honestly impressed with their ability to keep pushing more and more of this anime out, but I'm totally okay with it.

I guess this anime will never end...which is a very good thing.

I remember new ova episodes were announced quite back ago and now a new movie..! Keep it up Gohands :)

Nice, one of the best comedy shows around gets another release. Looking forward to it :3

petition for gohands to keep doing SYD until the manga ends.

GoHands should just keep doing this instead of doing more K or Hand Shaker.