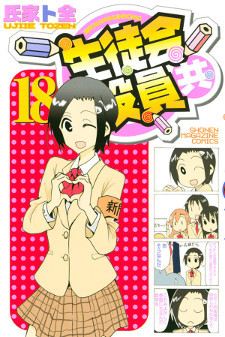 The wraparound jacket on the 18th volume of Tozen Ujiie's Seitokai Yakuindomo manga revealed on Friday that the 19th limited edition volume will bundle an original video anime on September 17, 2020. Staff and cast members will reprise their roles in the new episode.

The 4-koma school comedy series began its serialization in Kodansha's monthly Magazine Special in 2007 before switching to Weekly Shounen Magazine the following year. The 18th volume also contained an original video episode with its limited edition.

GoHands adapted the manga into two 13-episode anime seasons in 2010 and 2014. The manga has also inspired 15 original video episodes, which have been bundled with manga volumes and released standalone since April 2011.

Can't they do a S3 already so I can remove this from my on-hold, it's been there since 2015, that's the year I started watching anime, c'mon!

Hurray! I adore these stupid characters <3

Great news, I rewatch this every year. I had a friend just like Suzu, tiny, long straight hair, prone to instant rage and always telling me why she was better.

I hope Suzu finally gets a growth spurt in the last ever episode and she ends up taller than the other two.

This will be forever in my ON HOLD list. Happy to hear the news

Great, you can't get enough of this.

with this next ova, now the number of ovas released since the end of second season is 12 so in a way it got a third season already. In total we know have 2 TV seasons, * ovas between 1 and 2, A movie and now 12 more ovas since the end of 2 so that is a total 46 + 1 Movie at this stage. To bad it never got licensed in the west :(

Aye blood finally been waiting for quite some time

Yay nice news. That reminds me need to finished the last ova and hopefully this will slowly lead to a brand new season as seems like Gohands doing nothing lately.

I can't believe I managed to watch all of it. 95% unfunny moments in it but at least the loli was cute.

this series has a sense of humor too cold.

Just give us a third season already!

one of my fav anime of all time

Wow, and it continues!

Hopefully, a proper 3rd Season will air sometime in the near future, which will prompt me to give the franchise a go in advance!