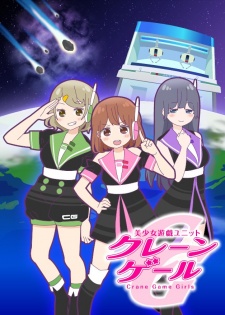 The official website of Bishoujo Yuugi Unit Crane Game Girls announced that the anime will get a second season airing this Fall. It has also announced that the main cast members will reprise their roles along with three new members including Aya Uchida (Love Live! School Idol Project), Akari Kageyama (Himouto! Umaru-chan), and Mikoi Sasaki (Tantei Opera Milky Holmes).

The original TV anime was about three "idols" who save the world from meteorites by clearing crane games with different techniques. Studio Kyotoma was in charge of the show's first season. It aired during the Spring 2016 season with 13 four-minute episodes.

The battle with the gorilla continue. I bet Kong gonna descend this time. Cross fingers for it X)

Why are we here?
Just to suffer?

Lemon said:
@aikaflip IT HAPPENED.
Because, Lord knows, we really needed a second season of this. The battle between Dark Gorilla and the Crane Game Girls continues! So hyped... >_< No, seriously, I really am.

Of all things to get another season....

I'll be watching this for sure, but I have 0 expectations as I thought season one was terrible.


GoldenDevilGamer said:
Lemon said:
I was always hoping that this masterpiece would get a second season and it finally did. Thank god, my wishes have been heard.
You typed my name wrong.

More of this? Oh come on x.x

KaoruMatsuoka said:
That moment when I realize that sales really don't matter in deciding what gets new seasons anymore

Just look at active raid, look at endride: it doesn't matter if you sell only 1 dvd anymore, if you want a second season you just say you're making one and you'll get one...sasuga anime industry.

Active Raid was announced as split-cour (Which is basically 24 episodes spread over 2 separate seasons in a short time frame (If an anime gets one season in say the Winter season and gets a sequel in Summer/Fall of that same year its split-cour)) though:
http://myanimelist.net/news/43627280

Endride was 24 episodes to begin with and I don't really see any news that its getting another set of episodes after it ends. From what I heard about that series that's probably for the better.

worth checking out or not?

Well it's only a few minutes per episode ...

I mean, CEO Gorilla isn't going to save herself.

Well I am all for original shows..but if they suck and are cheaply made.....then ikd....so can tell me if this is worth checking out or not?

Just look at active raid, look at endride: it doesn't matter if you sell only 1 dvd anymore, if you want a second season you just say you're making one and you'll get one...sasuga anime industry.

A cheaply-made show getting a second season to be produced in the same cheap manner? So unheard of!

Any meta-awareness they may have developed in the first season is now out the window, convincing me everyone involved was super cereal about everything they did. Why do the shitty idols get a quick renewal but the best idols don't? Like Sekkou Boys. Where's my Sekkou Boys second season?

As long as this remains at four minutes, I'm still gonna watch it because short anime has become my life.

I was always hoping that this masterpiece would get a second season and it finally did. Thank god, my wishes have been heard.

hmmmmmmm nope, I was so glad it was finally over

but.... why
good for those who enjoyed it though i guess lol