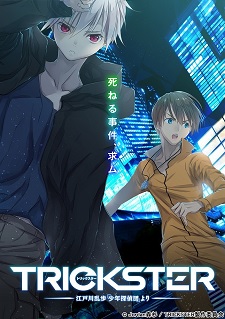 An official website has opened for an original TV anime titled Trickster: Edogawa Ranpo "Shounen Tanteidan" yori, which is scheduled to begin airing in October 2016. Bandai Visual has also uploaded the first promotional video on its YouTube account.

Trickster is based on Ranpo Edogawa's Shounen Tanteidan youth detective novels and features original character designs by mangaka duo PEACH-PIT. The series is set in the 2030s and will also have manga and stage play adaptations.

Synopsis
The time period is the 2030s. Before the mysterious detective Kogorou Akechi, the Boys' Detective Team is assembled. Their actions have led to the resolution of various small and large incidents. One day, team member Kensuke Hanasaki meets a mysterious boy named Yoshio Kobayashi. Kobayashi, who has an undying body because of an "unidentified fog," wishes his own death and refuses contact with others. Hanasaki takes an interest in Kobayashi and invites him to join the Boys' Detective Team. The encounter eventually leads them to the connection between the criminal nicknamed the "Fiend with Twenty Faces" and Kogorou Akechi. The fate of the two begins to move...

I think the orange guy is indeed made to be confusing. I came here to check if he is a guy and I'm so glad he is. PTW added.

24 episodes? I'm going to give this a try because I like the designs. I thought the brown haired dude was a girl too. Honestly, I hope this has hints of BL. (I'm probably a fujoshi.)

Well this is looking quite good, there was little I was interested in for October, so definitely gonna watch this.

Dang! #4 in the comment section and someone already mentioned it! Goodjob!

Looks great, I love the character design ^O^ Yamashita Daiki!!! Aww his voice is adorable as usual. Suicidal protagonist is also a +++ ohoho. :D Looking forward to this!

Meh, I'll check this one out, I suppose.

I'm too scared after Ranpo Kitan...
Animu should allow to rest in peace to Ranpo.

I'm gonna watch this only for the bromance, I'm not gonna lie it looks like the Fall season's Endride hopefully it doesn't disappoint me with it's bromance just like Endride did :P

Might pick this up if there's nothing to watch during the fall season, lol.
It just looks meh to me.... <-<

Thought the one in orange was a girl at first.

The MC wants to die on this anime. :3 Dazai of Bungo Stray Dogs, also wants to die, particularly suicide, cause he is a suicide maniac. This looks interesting, I'm gonna watch this xD

A Kobayashi who looks albino with a death wish. Please tell me he is a vampire.
I'm so watching because boys playing detectives. I'm loving everything about that PV.

Oh jeez. I'm more than cautious after that bland pv and the failure that was Ranpo Kitan.

Awww yuss. Let's hope this manages to capture Ranpo's eccentric characters well. Say what you want about Ranpo Kitan's mess of trainwreck plot, but at least it got the eccentric personalities right.

Let's hope Trickster manages to capture the "eccentric detective" nature of both Kobayashi and Akechi characters. I wonder if this show will use crossdressing too in order to highlight Kobayashi's androgynous nature.

Was just thinking how I would like more works based on Ranpo's writing, thanks to Ranpo's character being done right in Bungou Stray DOgs.

That's not how that works.

As long as its not a 100% direct adaptation, that IS how it works.
This is based on the novels but the setting is advanced to the near future(instead of 60's-70's)

Is it just me, or are anime synopses particularly hard to follow?

Like I always find myself rereading a synopsis a couple times just to be able to make sense out of it. Is it a translation issue?

Its not that hard to follow?
I mean it is basically modified original premise of the novels:
Akechi assembles a detective team of gifted orphan children who solve crimes.
One of the team members encounters a boy named Kobayashi who apparantly is immortal and is mentally messed up and antisocial because of that. Kobayashi is invited to join the team and that decision eventually leads to the conflict with Fiend of 20 Faces.

HecticLeo said:
There'll be some girl characters right? If not, pass. Looks too sketchy for me.
Depending on how much it goes into Akechi novels plotlines, there should be at least one female character