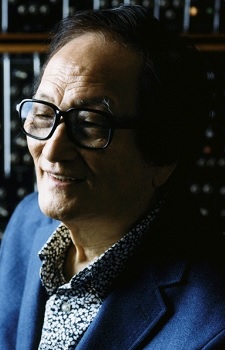 Nippon Columbia announced on Sunday that Isao Tomita, the composer who pioneered use of the synthesizer in music arrangements, has died from chronic heart failure at the age of 84. Tomita collapsed at his home in Tokyo's Shinagawa ward on Thursday, May 5, and was transported to a nearby hospital, where he died before 3 p.m. local time.

Tomita, who was born in Tokyo in 1932, studied art history in Keio University but also took private music lessons with composers Kishio Hirao and Koujirou Kobune. While still a student, Tomita began working on music programs created by public broadcaster NHK. He began working as a full-time composer after graduation in 1955 and composed music for films and television dramas over the next ten years.

In 1965, Tomita created his first composition for an anime series, Osamu Tezuka's Jungle Taitei. A symphonic poem he wrote based on that music later received an honorable mention at the National Arts Festival held by the Ministry of Education, Science, and Culture. Tomita also went on to work on Ribbon no Kishi (1967) and Dororo (1969).

During a visit to Osaka in 1969, Tomita encountered the Moog III-C modular synthesizer at an imported records store. Two years later, he personally acquired a Moog III-P synthesizer and began building his home studio for experimenting with electronic music. In 1974, his second studio album Tsuki no Hikari (known in the United States as Snowflakes Are Dancing) became a worldwide success, earning four nominations in the 17th Annual Grammy Awards. The album also reached the top of Billboard's classical music chart that year.

Tomita's latest composition, "Symphony Ihatov," held its first concert performance in 2012 featuring Hatsune Miku as a soloist. At the time of his death, Tomita was also preparing for the performance of his new composition titled "Dr. Coppelius," which is planned for November 2016.

A private funeral for Tomita is being held on Sunday and Monday with family members in attendance. A public memorial service will also announced at a later date.

That sucks, rest in peace you legend (you deserve it).

Rest in peace, you beaut. Thanks for staying hip and young.

Another musician gone this year. RIP :(

Rest in peace. You will be missed.

This guy actually embraces then new wave like Hatsune Miku unlike that Miyazuki guy.
R.I.P.

May you continue making music in the after life

Hope he rests in peace.

He was a great musician. What a loss for music. I discovered his music listening the Bach Fantasy album. My favorite music is The Sea named Solaris: https://www.youtube.com/watch?v=MVF45Kn_ZYg

If you like this type of electronic music i recommend Larry Fast (Synergy project) albums. Here is link to his second album Sequencer (1976):

listening just like some year ago because it original version got rebroadcasted in my local TV... nostalgia...

Man, what is it with 2016 taking away all the good musicians?

Rest in peace. I for one will miss all you had to offer.

Rest in peace you legend.

Respect from another student of Music.