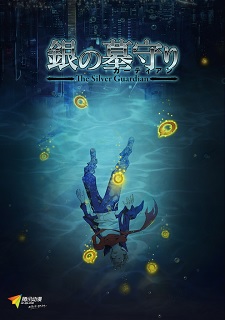 Shanghai-based animation studio Haoliners Animation League announced in a press release today that its Japanese subsidiary Emon, which was established in October 2015, will produce a TV anime titled Gin no Guardian (The Silver Guardian) for broadcast in 2017.

Gin no Guardian adapts the adventure web manhua Yin Zhi Shou Mu Ren by Ling Meng, which is publishing on the online portal QQ.com. Haoliners reports that the manhua has over 400 million page views as of March 1. A promotional video will be unveiled during AnimeJapan 2016.

Synopsis
Lu Shuiyin (Riku Suigin in Japanese) is a master of gaming, a skill only known to his classmate Lu Lian (Riku Lin in Japanese). One day, Shuiyin receives a device from Lu Lian for a tomb raiding online game. While Shuiyin is excited to receive the device, Lian is suddenly kidnapped. Shuiyin touches the device that was left behind, pulling him inside the game and trapping him there. What is the imaginary world inside the device? What will Shuiyin find there?

It is a world where two groups of people fight over the power of the gods, which originates from the tomb the mother goddess Pangu (Bango in Japanese). The two groups are the tomb raiders and the tomb protectors. The device Shuiyin received from Lian is called the Monolith, and it allows a normal gamer to go near the tomb. The tomb raiding group plans its attack by recruiting common people in the name of gaming. Shuiyin, as the final tomb protector, must fight against the raiders in order to save Lian.

@Tevens
i don't think it will have Chinese dub. it's made from Japanese studio. if it's personal preference about Chinese etc dub that's cool. i've played many Chinese-Korean games(especially mmo) and i've seen many movies, so i don't mind the dubs

@Ginki
as long as it's not chinese dub, i will watch it. but if it's chinese dub or even they use chinese song as it's soundtrack, sorry but i will pass on that. personally i don't like the tone of chinese language. or more like, i don't like the way they speak. well, the tone/the way they speak. if the VA is japanese and the soundtrack is japanese too, i'm in. and not only chinese. even if it's korea or any other country which has a connection to china except japan, nope for me. reason ? their language. hate me, dislike me, shit me whatever you want but that's me.

that link you gave me. that animation is superb and the story looks interesting too. but as soon as i heard their voice, it just ruined my enjoyment.
and like i said, that's just me personally. and i didn't mean their voice is bad, trash or something like that. it's okay, but personally i don't like it.

i bet that they will make only 1 season just to promote the manhua. it's nice to see a Chinese manhua get anime adaptation, but i prefer if they made Feng Shen Ji. the manhua is amazing and it's completed. we need more completed anime. Battle Through The Heavens and Soul Land would also be cool(but use the story from LN. for character design they can use the ones from the manhua)


Tevens said:
chinese ? okay i will pass on this one :D
the studio that does it is Japanese. since when Chinese studio has to be bad to do anime? watch this https://www.youtube.com/watch?v=cNj9D6amefA


yuliyana29 said:
Trapped in a game? Ugh, a bit bitter for my taste. Will wait for the PV.
the players are not trapped in the game. they can log-in and log-off anytime they want, even during combat


7eID said:
I would call this a Chinese Cartoon rather than an anime. (Reasons? You should know why...)
the studio that makes it is Japanese, so it's anime

yeah. it's such an absolute perfect shounen. it needs to happen soon!
Indeed it does~
Hype is slooooooowly building xD

Yeah it's a shame that there isn't too much of a chance for a ToG adaptation yet. I have high hopes that there will be one... eventually, but I really need it now
Let me see Baam and friends adventurously climbing the tower! xD

yeah. it's such an absolute perfect shounen. it needs to happen soon!

TomDay said:
_Hans_ said:
Patiently waits for Tower of God to get an anime

TOG only has 2 seasons. that's like what, 30 episodes at most? i'm sure it will be a smash and people will want more but there will be little content left...T_T

Yeah it's a shame that there isn't too much of a chance for a ToG adaptation yet. I have high hopes that there will be one... eventually, but I really need it now
Let me see Baam and friends adventurously climbing the tower! xD

_Hans_ said:
Patiently waits for Tower of God to get an anime

TOG only has 2 seasons. that's like what, 30 episodes at most? i'm sure it will be a smash and people will want more but there will be little content left...T_T

wow this is great! has noblesse green lit the idea of outside-country adaptions? i think so!

the one manhua i would love to see adapted would be hero (you ling). dear gosh that book is so good...

Wow, didn't expect this one to get an adaptation at all xD
Well I've been following the manhua and I can say at the very least it should be decent, and I'm looking forward to seeing all the Raiders/Raider tools in action~

VanishingKira said:
A bunch of no names in the staff not very promising...

ehhh.... the manga is funny. i don't get the hate. konosuba-like and it's already pretty good. but more serious theme. only read first chapter.

Hopefully this one will be more Nobunaga Concerto and less SAO/trapped in game world whatever, and focus on larger themes like warfare and the MC's personal battles with his arch-nemesis rather than some MMO jargons nonsense that i've gotten so tired about.

"OMG Chinese SAO!!" - Did you actually read the whole synopsis or stopped at the "trapped inside game" part?

I'm not familiar with Manhwa or Manhua at all, so this is interesting I guess? Kinda having low expectations though for this one.

I would call this a Chinese Cartoon rather than an anime. (Reasons? You should know why...)

With the anime market being strong in China, it's not surprising that they would start funding projects via Japanese studios. In addition to this title, we have Reikenzan this season and the upcoming Soul Buster in fall. Gin no Guardian is especially interesting because the studio was created by a Chinese company, instead of contracting an already-existing studio. However, I would imagine it keeps it easier to control any particular project.

I would like manhwa, including Korean webtoons, to be animated, but I'm not sure that they have a strong enough foothold it Japan just yet. Or if the Korean audience for anime is as strong as China's audience. Time will tell. Web series at least seem to have gained some popularity, and there are some Japanese web comic services that use a similar format.

The 'Gravekeeper' part. Honestly, I'm not sure it's the same thing until I read the synopsis. Also, I can't read Chinese nor remember Chinese titles.

Oh, I can explain this one.

When the anime series was first discovered via the Anime Japan website, it was written as 銀の墓守り(ガーディアン). The kanji itself means gravekeeper, but the parenthesized katakana reads guardian in English. Thus, it serves a double meaning. I'm guessing it wasn't utilized or at least obvious in the Chinese title.

I always thought it was Korean.

It's really easy to confuse both of them.

I always thought it was Korean.
Manhwa is Korean.

I always thought it was Korean.

Xenocrisi said:
Still don't know what a Manhua is.