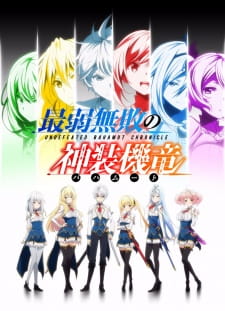 A new key visual (pictured) was also revealed, and animation studio Orange was announced as the studio responsible for the CG animation. The series will air in Winter 2016.

The Saijaku Muhai no Bahamut light novels by Senri Akatsuki and illustrated by Ayumu Kasuga have been published by SB Creative since 2013 under the GA Bunko label. There are six volumes in print, with a seventh volume scheduled for release on October 14.

A manga adaptation by Itsuki Watanabe and illustrated by Fumi Tadaura has been serialized on Gangan Online since July 2014.

Seriously this plot is getting old -,-

FlameAlchemist25 said:
I read this title thinking it would be about the second season of Rage of Bahamut.

Never fear. There's already a sequel on the making for Shingeki no Bahamut though.

never heard about anime, and also i don't read the LN version, so is it worth to watch??

That kind of genre when you probably can guess the story.
sighhh

read the LN but i can't get myself to read the 2nd volume just like asterisk...

i'll watch but i don't have any expectations

I read this title thinking it would be about the second season of Rage of Bahamut.


ios said:
i thought this was about Shingeki no Bahamut lol
we all did

gross, male lead is voiced by a female actor...

As long as its ecchi and not pretend ecchi.

So it looks like Lerche will have two TV series airing in the same season next year.

seems like an original premise
Gee, where have I read this before?

I'm not as irritated by this as everyone else seems to be, but it is kinda boring having at least one of these shows in pretty much every season. Well, at least there aren't three of them like this season for winter yet.

HandsomeMan said:
Eww, not the Bahamut I want

Oh, and here I thought this was an idol anime as well....

thebrentinator24 said:
So we get yet ANOTHER ecchi/harem magic academy LN adaptation where the male lead walks in on a half-naked/completely naked girl, and then gets challenged to a battle that he'll somehow win even though he probably shouldn't. And of course, the girl is a princess. Don't we already have this right now with Gakusen Toshi and Rakudai Kishi? I understand that it's impossible to be completely original, especially nowadays since so many ideas have already been done before, but at least make an attempt to stop giving us the same recycled story over and over and over again under a new name.


HandsomeMan said:
Eww, not the Bahamut I want
You and me both.

HandsomeMan said:
Eww, not the Bahamut I want

Same. Got excited for nothing.

thought this was the other bahamut.