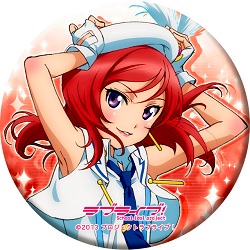 According to Kagoshima Prefectural Police, Wakiyama allegedly produced 13 badges featuring Love Live! characters and sold them on the Internet in April. Of these, 12 used registered trademarks or similar imagery. A report indicated that Wakiyama earned 500,000 yen (US$ 4,000) monthly from sales of the goods. Approximately 700 pieces of the badge were seized from the suspect's home. The investigation was conducted jointly with Ibaraki Prefectural Police at the request of the animation production company, Sunrise.

Love Live! The School Idol Movie, the latest installment of the series, opened in theaters in Japan on June 13. It held the top box office position in Japan for three consecutive weekends upon opening. Ticket sales have exceeded 1.4 billion yen (US$ 11.4 million) as of July 5 with more than 1 million tickets sold.

What the heck? Aren't they just badges? Who pays through the nose for a badge?

wow.. this guy made bank from can badges..

Is counterfeit cancer as malignant as the real one?

I wonder if Wakiyama liked the series himself lol

Lesson learned: Don't screw with idol related goods or your ass will end up in jail.

"Hey dude what are you in prison for? Murder? Larceny?"

Fun conversations to be had.

If I were an alcoholic, I'd be drinking to this. I can't believe someone could make bank off of selling badges from his home. No, I believe it, but I just don't want to.

Hehe i'd buy a set of those if i get the chance...

If He sold counterfeits for me it's fine that arrested

ReaperCreeper said:
We ANN now?
Pretty much my thought. Even something like this can get a topic of its own. MAL staffs bias much? Or has the rule changed?

I have corrected "weeks" to "weekends." Thank you. Regarding the top position claim, it is reported as is from Mainichi's article, so I apologize for the error.

I like how MAL is more dedicated to fixing the errors that ejc points out using sources and indisputable facts than ANN is. Like really and truly much as I crap on MAL's community a lot they're doing a significantly better job at reporting anime news, correcting mistakes and being up to date with what's happening than ANN is and they don't even do it for profit. Honestly good on you, I'm glad I can say something positive about MAL for a change.

Personally I'm surprised this hasn't happened more often or maybe schemes just aren't getting reported. I know Pokemon has always had a really bad problem with counterfeit merchandise. Wouldn't doubt if it's the same for Yokai Watch. Most late night anime never get on the level of where Love Live is for merchandise exploitation though, but considering it's on Disney Channel now I'd almost say it might have graduated. It would not shock me if the inevitable next TV entry for the franchise just airs during the day.

I'm not sure I've ever seen anything quite so explosive that gets daily news articles like this one on both sides of the Atlantic where there's always a storyline going on related to it. Maybe Madoka Magica or K-On, though I don't see people walking around Akihabara decked out in layers of pins and tchotchke and rooms just slathered with merchandise in every nook and cranny from that one so maybe not.

It's a reminder to always look out for counterfeits and buy stuff from official sources and large auctions.

lmao, just like in season 1 when they notice that there was merchandise of them at the idol store.

I have corrected "weeks" to "weekends." Thank you. Regarding the top position claim, it is reported as is from Mainichi's article, so I apologize for the error.

This is wrong. I've had to correct stuff like this at ANN as well. LL movie held the #1 position for the amount of tickets sold for 3 consecutive weekends, but was not #1 in weekend box office gross for 3 consecutive weekends. It was #1 in its opening weekend and its 3rd weekend, but dropped to #2 in its 2nd weekend.
I have corrected "weeks" to "weekends." Thank you. Regarding the top position claim, it is reported as is from Mainichi's article, so I apologize for the error.