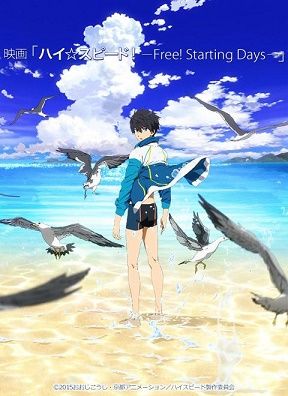 According to the Free!: Eternal Summer Special Event held today, light novel High☆Speed! will receive a movie adaptation titled High☆Speed!: Free! Starting Days to premiere on December 5, 2015. The official Twitter for the anime has been updated with the key visual.

The light novel will also receive a manga adaptation, drawn by Shiori Teshirogi. 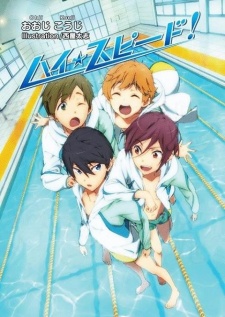 yey more shota kisumi
kisumi will be in the movie right?
but srsly, i hoped to see them in college or something like that, not a big shota fan.

i got bored of Free in its second season so i dont care much about this franchise but Shiori Teshirogi is drawing the manga, that sounds interesting

Sad since Rei is my fav, but I'm still looking forward to this!

omg YASSSS!!! I knew it there'll be more Free! also movie based on the original novel. Ive read those and they were actually better than anime imo. The character are more fleshed out like Haru's character, Rin's less-whiny cutie and also the flawfree Makoto lol even Sousuke is less random than the anime.

so they are going to introduce other characters from their middle school as well? *hypeee*


moeanao said:
Yasss! More free! and more Makoto <3
But tbh I'd rather have a sequel than a prequel.

Well, I'll count this announcement as a reminder for me to watch Eternal Summer within the next few months…

xKiYoMiNaTiONx said:
They won't be voiced by chicks... as far as I'm concerned, according to fans who went to the event, all the seiyuus will be their younger selves.

This is not a continuation, but an adaption of what seems to be perhaps part HS and part HS2 novels.
Didn't they have female voices while in elementary school? I guess they will have their male voices once in middle school.
Official Site is up. Main cast is Nobunaga Shimazaki. From the key visual I can tell that's from middle school, the swimwear.

No, seriously, what is wrong with male fanservice?

I'm so hype for this
I thought the ova would be the end, but nope, I get more.
I did speculate if there would be a movie, I am glad it is getting one as the prequel stuff is pretty interesting.

Interesting... Free! prequel. And I'm sure I have a lot of friends who would absolutely love this news. :-)

Maybe since they're like, actual kids this time, their childish, immature, and nonsense behavior won't gouge my eyeballs out from rolling so hard.

If this results in more doujins I'll be happy.

This is great news! :D

Aaand this point is getting old, enough with it.

Shut up
No u
Nah you