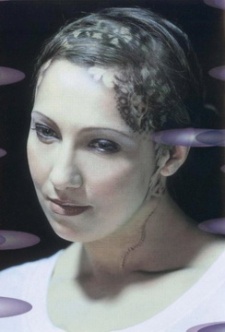 She had a legendary voice. There will never be another Origa.

Her official website says she died from heart failure:
http://origamusic.com/information/

But whatever was the cause of her death, may she rest in peace.

RIP Origa-Sensei
My playlist will have your voice forever.

It feels so surreal to listen to a song while knowing that the person singing it is no longer...

You see, I have only seen the first three or four episodes of the SAC series but I'll take this news as a sign to download them *again* and properly watch the whole thing. It's the least I can do.

May she rest in peace. Dying this young is just... it's not fair

Always sad to hear of someone who dies to any kind of cancer. It's a shame.
I hope she rests in peace.

Very sad news. She was a great singer.

Rip. One of the best singer of the GiTS franchise. She performed one of the greatest soundtrack. Even though i just heard a couple of her works, its really powerful and magnificient

Not really attached to the series so dunno who this is. But damn, what a loss. RIP

See you on your next life, Comrade.

Inner universe to me is the start of many things. It is unique, beautiful, something very new to me many years ago. It is the reason i started watching GITS and that leads to many other titles. I am so very sad at this news but her songs will live forever. Rest in peace.

Wha? RIP. Inner Universe will always be my fav opening.

ORIGA – A Russian Songstress in Japan
There is no shortage of domestic talent in the Japanese music industry; but that does not mean that there is no room for foreign musicians. The Russian singer Origa had her big break in Japan with the opening song to the popular Japanese drama series Blue Era (Ao no Jidai) and she sings in both Russian and Japanese. She's worked together with Yoko Kanno on tracks for Ghost in the Shell: Stand Alone Complex and lent her voice to the soundtrack of the video game Final Fantasy XIII-2. Nowadays, Origa is also active internationally, and performs at anime conventions the world over, among them Anime2014 in The Hague.

makes me regret even more not going to that concert :( even though it was relatively close, seems it was my last chance.

OMG this is terrible news.

RIP Origa I loved her voice very much T_T

Rest in peace.
I remember her singing the Ghost in shell OP? One of my favourites.

Thank you, Origa. Rest In Peace...

Rest in peace, and condolences to any and all surviving family members and loved ones.


For those interested, here's a translation of an interview with her that ran in en edition of the Dutch anime-magazine Aniway:

ORIGA – A Russian Songstress in Japan

There is no shortage of domestic talent in the Japanese music industry; but that does not mean that there is no room for foreign musicians. The Russian singer Origa had her big break in Japan with the opening song to the popular Japanese drama series Blue Era (Ao no Jidai) and she sings in both Russian and Japanese. She's worked together with Yoko Kanno on tracks for Ghost in the Shell: Stand Alone Complex and lent her voice to the soundtrack of the video game Final Fantasy XIII-2. Nowadays, Origa is also active internationally, and performs at anime conventions the world over, among them Anime2014 in The Hague.

AW: What was it like performing at Anime-con? And how was it different from performing in other countries?
O: It was very fun to be allowed to perform in The Netherlands. It was very atmospheric, the hall was beautifully lit and I felt as one with the crowd. If I had to compare it to performances in other countries, then the biggest difference would be the atmosphere. Though the crowd is equally enthusiastic everywhere. It's difficult to say what feels different to me, because I haven't done many performances outside of Japan and don't know the people personally; but I can feel their energy. I do notice that people in the U.S. will immediately start cheering while crowds in Japan are more reserved. In Europe they're somewhere in between.

AW: Hoe did you end up in Japan?
O: In December of the year 1990 I received a personal invitation to go on a three-month trip to Japan to represent Russia in a series of organized events involving several concerts and interviews. I had not expect that I would be staying there longer, but then I went on TV and met the producer of Road & Sky Japan, whom I signed a contract with and I am still working for. At the start of my career I'd decided to go by the name Origa. My real name is Olga, but I chose the stage name because the Japanese cannot pronounce the 'l'. The Russian language is very melodious and that really appealed to the Japanese. As I learned more of the Japanese language, I incorporated more of it in my music. It was not until my fifth album that I had recorded a song that was fully in Japanese. Now I've released eight albums and there's several Japanese tracks on it.

AW: What was it like being allowed to work on popular titles such as Ghost in the Shell and Final Fantasy?
O: The Final Fantasy-series is very well-known, so I felt very honored. When I worked on Ghost in the Shell it was not so well known in Japan yet so it simply felt like work to me. Before working on it, I had very little interest in anime and manga, but I started exploring them more because that was where I had been the most successful. I mostly started watching anime aimed at children. My favorite anime are the ones from Hayao Miyazaki.

AW: What was it like working with Yoko Kanno? And can we expect more collaborations with her?
O: When we first met, we were both unknowns still. Yoko wasn't working on anime yet, but she was a talented pianist. While working on my first couple of albums I invited her to come over and play the piano a couple of times. When Yoko was starting out as a composer, she asked me if I wanted to come sing for her. She was interested in my unknown (to her) language, she thought it sounded 'Ghibli-esque' and she could really use that for her compositions. Working with her was a lot of fun, she's always very enthusiastic and a real go-getter. I hope to be working with her even more often in the future, but nothing is certain. At the moment I am busy with several projects and writing original songs. This year will also be the 20th anniversary of my breakthrough in Japan so I will also be releasing a Greatest Hits collection.