Hide AdsLoginSign Up
Send us your hidden gems of 2022 for "You Should Read this Manga!"  ( •̀ᴗ•́ ) ♡
Forum Settings
Forums
Top
>
Forum
>
News Discussion
>
Original TV Anime 'Tokunana' A...
RecentWatchedIgnoredSearch Forum 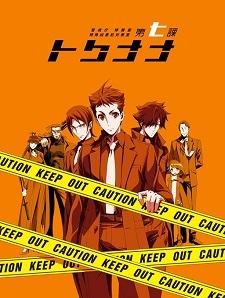 Synopsis
To Keep Searching for What You Admire Straightforwardly.

A long time ago dragons ruled a world of elves, dwarves, vampires, homunculi, and humans. In the present dragons have all but disappeared, so the ones left chose to live together, and their appearance came to resemble that humans. The year 2x19 in Tokyo is mostly a time of peace, but a group called the Nine cause chaos in their quest to obtain the dragons' powers and attempt to change the world. The police form a unit consisting of various experts to fight against Nine; the Special Crime Investigation Unit - Special 7 (Tokunana). These individuals have abilities that surpass the average human, to the extent that there are rumors of rebellion against them. A rookie, Seiji Nanatsuki, enters the unit. While teased by other members with colorful personalities, he sets out to solve cases involving Nine with his bright mind and straightforward thinking. Will he be able to find justice in the most grueling circumstances?

The anime will have a stage at AnimeJapan 2019 on March 24. The three main cast members and chief director will be appearing for a talk show.

Offline
Nov 2007
30443
Other characters with cast yet to be announced:

Will keep an eye on this one for sure!
#4
Rinji-

she already reminds me of Seri<3

followed by a cute loli

Looking forward to it this Fall!
#7
-Elevate-

Offline
Nov 2007
30443
DumpsterKing said:
Rinji- said:
What's with the synopsis?
Probably Google translated from Japanese.
No, I translated it myself before another news mod. kindly corrected it for me.
tsubasaloverMar 20, 2019 10:18 AM
#12
xchyssa

Offline
Oct 2013
1369
I love the vibe of this show!
#13
removed-user
Offline
Jul 2018
570557
This is giving me Kekkai Sensen vibes especially the characters and the premise. The PV looks really promising and has my attention already (only gripe was the main lead design). Can't say much about the staff working on this show but really hoping this will be a 2-cour show..
removed-userMar 20, 2019 12:16 PM
#14
Klad

Looks like it'll be okay to me though. It kinda reminds me of Psycho Pass
#15
Chouninatte

A crisp police series would be welcome. Let's hope for some fun.

The jazzy score is nice.

This has my interest.
#18
Flamexes

Offline
Feb 2019
241
Sounds interesting, looking forward to it
#19
Shadow-Chan
Offline
May 2007
2190
Shimono Hiro and Tsuda together again as MCs like in ACCA omg. This is so exciting plus a megane elf voiced by Tatsun. Really hyped to see the great Chrono-sensei chara designing for anime. PV gives me Hakata Ramen vibes.
#20
MagicNESSOfLight
Offline
Mar 2018
3
Looks interesting.
#21
domskieeee
Offline
Aug 2018
44
Why does this give me a vibe of a hybrid of Hakata Tonkotsu Ramens + Lupin III + Jormungand haha
#22
Kaymyu