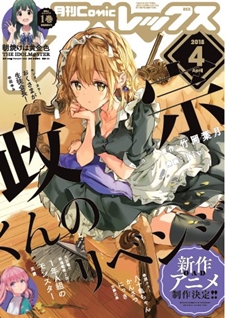 This year's April issue of Ichijinsha's Comic REX magazine, which goes on sale on Tuesday, is announcing a new OVA episode for the Masamune-kun no Revenge anime series. The OVA will be bundled with the tenth volume's limited edition, which is scheduled for a July 27 release.

Masamune-kun no Revenge adapts Hazuki Takeoka and Tiv's romantic-comedy manga by the same title, which has been serialized in Comic REX since October 2012. A 12-episode TV anime adaptation by Silver Link. aired in Winter 2017, and was simulcast by Crunchyroll. Funimation also streamed a dubbed version simultaneously.

The manga series has been published in English by Seven Seas Entertainment since June 2016, and the seventh volume was recently released in January this year.

Offline
Apr 2016
17735
The "maid" girl is now popular so creator must boost her popularity even more with new OVA about her, because thats how shit is done in nippon, you sell characters.
#8
no_good_name

Just don't hope that this does mean season two.

Offline
Aug 2008
4282
It was like Toradora with less shitty female lead and shittier writing. Equally forgettable though. I assume it will be pool/beach episode so if someone is into that...
#13
Detective1412

Although it's most likely gonna be a beach or fireworks episode I'm all for 2017 nostalgia. Pretty excited ^_^

To be honest I can see the dislike but to be fair I did quite enjoyed the anime to an degree so.
#17
Pnbn

Offline
Feb 2016
55
Err.. It was a terrible anime but I dunno I wish if it gets a second season just to now how the story will be ended but I'm don't wanna read the manga.
#18
PolarCyrus97

also this is manga bonus... so more like gift for the actual manga fans... not related with anime adaptation..

Offline
Nov 2016
1912
This is the Same Problem I Am Having With JoJo. Its Nice Getting an OVA and All but WHERE IS THE NEXT FUCKING SEASON??? wrrryyyyyyyyyyyyyyyyyyyy
#21
Elegade

Offline
Sep 2014
2794
For a second there, when I saw Manga Masamune kun, I thought "Here we go again, another manga ending." Glad its still going, but gotta progress the relationship already. You can't be allergic to a specific person, that's just stupid.
#22
Zephaas
Offline
Nov 2016
15240
Primerose003 said:
First and yay. 2017 nostalgia. Even tho it was a shitty show
Nostalgia from not even one whole year ago?
what.

that fat kid is so annoying.. why do she cant recognize the real masamune was.

Offline
Dec 2014
119
The staff need to redo the ending. It was anti-climatic. It has so much potential, but it was too short for the development needed for the kind of plot the creators were going for.
See All Discussions