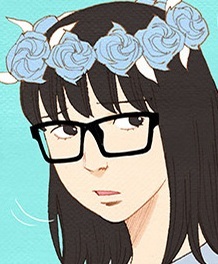 HappyD Jul 21, 8:43 PM
Presence was my favorite visually and I absolutely loved the main character's design. "Strange Tales of Meiji Machine Culture: Westerner's Invasion", however, was my favorite story. I liked how it was sort of a period piece despite its quirkiness and absurdity. I also enjoyed how horribly uncaring and morbid the frame story was.

can you help me here a bit,

i am trying to find and watch https://myanimelist.net/anime/9850/Koguma_no_Koro-chan

would appreciate your help =D

HappyD Jan 16, 6:47 PM
It was very enjoyable! Fantastic animation and music. The story wasn't mindblowing and I wasn't very invested in the romance, but that's just how I am.

Gameboon Jul 11, 2019 11:55 AM
I just finished the Yona OVA. The second and third episode provided some good backstory, which was nice. And the first one was decent enough if you want a generic hot springs episode.


I checked the manga page and noticed it's pretty popular and high-ranking, so I can only conclude the manga must be a lot better than the anime.

SparkingVolt Apr 9, 2019 1:58 PM
I don't really like things with fanservice either

makethegradef Mar 10, 2019 2:56 PM
Gonna watch the anime to Sakamichi no Apollon. I want some more coming of age stuff. How's u? I'm good because been binging animes but just days been inactive. I'm thinking I should go do sports or something

makethegradef Aug 11, 2018 1:13 AM
i vaguely remember that episode, samurai champloo was awesome though. I remember that cricket episode and a bunch of others too. did you watch dub? def dub over sub for samurai and also i just finished both seasons of space dandy.. i want moree. i have this app tachiyomi to read spirit fingers but its been buggy loading the chapters its fine now so I'll catch up with some of the newer chapters released. its ended?? wait meaning the translators dropped it? if that really is the case i could just learn korean and make my own group, with you being a core member wew but seriously i would if no ones releasing any english chapters. i remember talking to some korean on facebook whos also a fan of spirit fingers, i was blown away by how many chapters ahead they were... 140 chapters or something ahead of us v.v must be nicee

PoonOrange Aug 4, 2018 7:16 AM
Oooh i see, can we add you in our group chat (Goharn and the others) tho D: [You can mute tho if it spams notification xD]
And as for me, uni just started a few days ago. =D prob gonna be busy soon and I switched over my main FB account and added some people that i talk to with "Poon Orange".