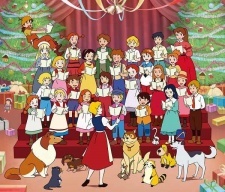 Tom Sawyer English dub NEVER aired in any networks in the last several years, so I don't have any episodes recorded.
If the English dub aired somewhere, I would have found a way to record it :)

EvenJellyOn Apr 17, 2015 10:53 PM
You should work on getting better music in your videos. It's too loud and it's hard to hear you most of the time.

hirahira Apr 7, 2015 8:43 PM
Yeah, the kid shows about card games and such are pretty boring to me. Maybe I will give them another chance someday.

I hope you have a great day too :D