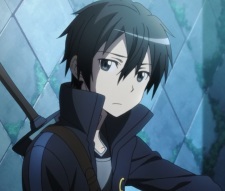 2 - Well, most fans were comparing, I m in a very good position to compare, and it was mostly praise from me.
LN vol. 12 will come out this August, not much longer, so yes, definitly fast, at least much faster than something like Rezero official translation!

3 - TBH I never had problems with it, as long as it doesnt turn out into something disgusting, onii-samas aside, I find her more interesting than annoying, so even if she was the final ship, I would be fine, again, as long as the execution to it unfolding doesnt suck really bad.

4 - 86 LN volume 1 was outstanding, definitly, and the series seems on good tracks to really keep being one of the better ones released in recent years.
I will say vol1 is very poetic and beautiful.
Where you are at Danmachi? The last 2 arcs have been amazing and where this new one is going, the series is definitly not disapointing.

5 - That is not a problem for me, that said I found Tatami Galaxy overhyped as fuck and ended coming out very disappointed out of it...

animejas May 4, 5:18 PM
Trust me, even I'm weirded out by my own ratings and thoughts on shows due to how unpredictable I am. It's just how I've been since I was born in general though when assessing anything. Pretty volatile with my scores and more often than not due to how much I've seen and a lot of newer shows feeling really dull, corny, dumb, frustrating, my ratings for many seasonals per season all fall low. That's why I only consider a season to be good or not depending on how many shows I find enjoyable per season. With my ratings, it really depends on multiple factors. Enjoyment is a pretty big one, and visuals/music alone can't carry a show to a good score unless the characters and writing are good for my taste in general.

That's why shows like Jujutsu Kaisen which aired a while back is terrible for me since I just felt the writing was incredibly corny, characters were unlikable and annoying like the comedy, themes were bland and I had no fun at all with it even once despite how it can look nice. Meanwhile Mushoku Tensei which I'm rewatching right now is a fantasy anime that I actually really enjoy with great world building, interesting characters that I care for who develop (even amidst the Rudeus controversies), great pacing and on top of that, enhanced by amazing visuals and music to create such a fun season of anime in general. A show doesn't have to look perfect but if it can entertain me and have solid writing to back it up consistently, that's all I need and hope for, which I normally don't get with most shows I watch now since I've seen so many and my standards are too high.

Also, that Raptors shot I still watch once in a while even now. Kawhi for that one season was a god for us, grateful to have had him in our team for a season and win the chip there. Wish DeRozan won a chip with us but at least the Raptors have one title and Kyle Lowry is a champ at least.

Playcool Apr 16, 3:34 PM
If you were in the process of reading MT, and had a direct comparison across multiple volumes, it would be hard to ignore the LN, I legit saw a good amount of scenes on the WN where I was confused and did not totally understand something, because of the poor editing, and while later volumes get better, it is still an amateur work, which is normal, but has to be said, especially when you have the LN to compare to.
But the whole English translation will take many years, so I don't mind going with the draft version.
I did feel that the major death of vol12 could have been even more impactful than what I read in the WN, if the choice of the words was fitter to it, that is just one of the examples.

The last time a studio was created to adapt something, Attack on Titan was born, I never had low expectations for MT, and it totally deserves this quality of adaptation.

So one day when Mahouka is completed in English, you are sure you would not want to go back to it?
If an LN takes many years to translate, so be it, I will just read it after it is done, just because I can only read in someday in the far future, doesn't seem a motive for me to drop it, if I enjoyed it enough.
Slime LN takes ages to come to English, wanted to go with the LN but then saw its state.

Danmachi and 86, right now, along with MT, should be of the few LNs that will be reading whenever a new volume comes out tbh.

Still, a joke should look at how long it took the LN of Rezero to reach and surpass S1 adapted volumes.
If you have never seen the anime, you are in for a good surpass, they handled many scenes really well.

Both series I want to leave for a bit later, I could be watching Mononoke this same year, had it on my watching list for a while.

Playcool Apr 10, 3:34 PM
Official releases take at best a minimum of 3 months, not that long if you are switching on what you read.

The worst offenders right now would be Shield Hero for me, there was a period it was taking too long for the updates, to the point I reached vol12 and stopped, and now at vol17-18, I should have plenty to enjoy.
Another would be Mahouka, but then again I m have been on vol7-8 for many years, but I m still putting it on hold considering how many volumes there are to translated and the fact the official release fucked the fan translation, and it will take a long time to surpass the later and even way more to reach a point where I would feel safe to read at ease.

If you catch up with an English release, that caught up with the original Japanese release, that is the real problem, look to Arifureta, those damm volumes taking way more than 6 months in between each other!

Rezero is another case where there is already quite a lot out, but the English release slacked too much and if you see the anime, you will have surpassed it.

First world problems though, I still bitch about them, but in the end, I have so many options to read... really wished Mushoku Tensei English release would have started sooner, had to go with the web novel, and no matter what people say, revisions from the writer aside, the editing of the official English translation is far superior to the worst of the early volumes, and still noticeable better than later web novel volumes, when the translator improved in his skills.
Thus this is a case where I will revisit the LN release for stuff I was forced to read the web novel, it does improve the experience.

Playcool Jan 31, 11:29 AM
Watching anime has a previously LN reader for that is making a mistake, but oh well...

Easily the best arc so far for me.

Petricho Apr 16, 2020 7:53 AM
Hey, i also quite like reading. If you don't mind could you tell me what the books you linked are about? they seem interesting and i preferably want to hear it from someone who actually read them rather than reading a bio of the books to get more sense of what they're about. Thanks in advance

Playcool Feb 6, 2020 8:33 AM
We have had many sequels announces recently, which is quite good.
Outside that, the big news were really last summer, with what happened to KyoAni...

Even if you have a full-time job, I m sure that if you really wanted, you could be a bit more active, I mean, unless you have a really unique work, you do have some breaks no? Sometimes it is just a matter of switching gears you see? A laptop helps.
My point is that you probably already had the opportunity to be more active here, and deep inside you just don't feel that much anymore about this like you used to, I understand.
I used to spend a lot of time here to and look at me, I do still comment on the forums now and then, but I usually am not very active here either.
It is better this way for me, prefer to use my time on other stuff, just like you do.

Playcool Sep 2, 2019 6:31 PM
I think I used Nisekoi alot to compare to, since that was the first early on my life as manga reader here that I realized, when greed and making a buck are taken to far, no series is safe, Nisekoi add a really solid start too, not as good as Souma but still
With that said, from the a PoV of the mangaka, can they really like that go and make the switch?
They are the ones creating it, they should be able to realize the quality drop in a way no? Maybe not if the creators are too full of themselves to realize but still...

Also it was sligh but I enjoyed S1 a bit more than S2, from there on slowly decayed still with some good moments.

You so out of MAL and all... how has life treated you?

Playcool Jun 3, 2019 10:09 AM
I have heard, still on chapter 200's, seems like last arc is really trash... lets be honest, the series does lose some steam after chapters 150-170 on the manga, the current arc I m on, it is still enjoyable but a bit worst, but still decent, but before I could marathon the manga, now there isnt much of an appeal for it.
Do you think the manga would have worked, if they had made it for a monthual release? I always though weekly was killing it.
(also heard the mangaka may actually be trying to axe it, not any proof on this but...)

Well, the manga is about to end in 3 chapters, or so they say it, if it is really the end or just a change to new serialization, that is the question... the mangaka dragged the plot too much due to the series being popular, similar shit to nisekoi in a way, shit got old, FAST.

Nah, your avatar was and should always be Kirito, feels wrong to have Obi-wan there.
The Lonely part suits Kirito much more, and in GunGale he is technically a jedi! :P

Playcool Feb 8, 2019 8:09 AM
BTW forgot to say, I finished Index LN mid January... you honestly should have just waited and readed those full 22 volumes rather than skipping ahead to NT.
You you will go ahead and have a butchery ahead of you with S3.
And yes you are missing alot, there are quite some amazing volumes you should have readed the LNs of, that were garbage adaptations.

Also, too late to say... but you should NOT be allowed to change avatars bro, it just feels wrong, give back that Kirito smug face, already...