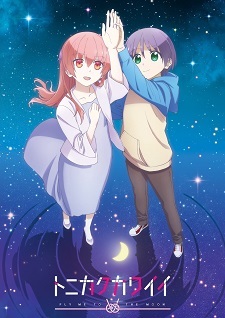 The official website of the anime series adapting Kenjirou Hata's Tonikaku Kawaii (Fly Me to the Moon) manga announced a second anime season and a new episode on Saturday. The website also revealed an announcement promo and teaser visual (pictured).

Hata began the romantic comedy manga in Weekly Shounen Sunday in February 2018, approximately ten months after ending Hayate no Gotoku! (Hayate The Combat Butler) in the same magazine. Shogakukan shipped the 17th volume on August 18. Tonikaku Kawaii has a cumulative 3.4 million copies of its volumes in circulation.

VIZ Media licensed the manga in English last February and published the seventh volume on September 14. The eighth volume is scheduled for release on November 9.

Synopsis
Nasa Yuzaki is determined to leave his name in the history books. Ranking first in the national mock exam and aiming for a distinguished high school, he is certain that he has his whole life mapped out. However, fate is a fickle mistress. On his way home one snowy evening, Nasa's eyes fall upon a peerless beauty across the street. Bewitched, Nasa tries to approach her—only to get blindsided by an oncoming truck.

Thankfully, his life is spared due to the girl's swift action. Bleeding by the side of an ambulance, he watches as the girl walks away under the moonlight—reminiscent of Princess Kaguya leaving for the moon. Refusing to let this chance meeting end, he forces his crippled body to chase after her and asks her out. Surprised by his foolhardiness and pure resolve, the girl accepts his confession under a single condition: they can only be together if he marries her! [Written by MAL Rewrite]

i actually skipped season 1. looks like PTW it is

When is this airing?

I'm so hyped for this!
Although I just finished reading the manga cos I thought there wasn't going to be another season.🤦

I cant wait, hopefully it'll answer a bit more of who's tsukasa

its really amazing series, i hope this one is best.

Well, a hardcore manga fan like me is screaming from the inside out.

the series is definitely heart touching, i loved it.

This is an absolute poggers moment

Can't wait to see them again

That said, the sauce barely started past chapter 120, and S2 will probably reach chapters 40-50, or at most 60, so meh. Whatever :s
Still great /copium.jpg

awesome news!! :D:D:D:D so is the new episode going to be another OVA packaged with a tankobon volume?

Hope the story goes forward, the first season was weak.

Nice!!!! The first season was excellent and one of my favorite romance anime. Cant wait for this

I can't wait to see them again for the next season. I need more daily dose of cuteness XD

Not surprised, the series melts your heart ❤️

Oh I cant wait, Great to hear theres a S2

Oh I can't wait for this