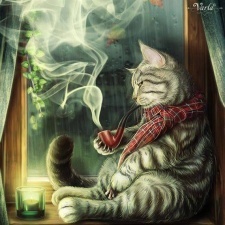 Compare to now, anime fans have it easy on accessing the medium. Before I knew what anime is, I watched dozen of AMV during my childhood.

Also, it quite rare to see otaku putting modern shows in their faves.

kitsune0 Oct 19, 2020 3:25 AM
I dunno about MTG anymore, sorry, it's been more than two decades when I've been in it, and here they are that strange phenomenon - they are big, there are a lot of people playing MTG, they've got big prizes and international sponsorship and all that. But outside of their own circle? Barely anybody know anything about what MTG community here is about, at best people heard and recognize the name, but that's all.
I doubt, however, that our local con will get virtual. People here still love to meet face to face, get a photo with their favorite cosplayer or character, participate in quizzes and just have fun socializing with fellow fans. +)
I dunno, honestly, I never asked the shop owner (we're not real close friends, but we have pretty good relationships) since I consider it a business secret of sorts (it considered a bad habit here to ask about how much money one making in a month), but looks like that indeed a rent was a cause in every case. As I said - they exist, but they don't do exceptionally well, so I guess when the owner finding a new place that have lower rent, he just moves. Also, as far as I understand, some customers helped him to move, at least once, on their own will (i.e. he didn't even asked for help). And sadly yes, rent can go up all the time, i.e. every year for sure, that's the reality of my country.

kitsune0 Oct 18, 2020 6:24 AM
Nah, it's OK, nothing to apologize for. +)
Yes, I know all too well about sad situation with comics shops in USA, I've been and still is, for several years already, subscribed to several YT channels that deal, one way or another, with North American comics industry. And what you described is almost exactly describing our comics shops too, with exclusion of anything collectible card games-related (for some reasons it just didn't click here, even though collectible card games were here for more that two decades, but never went over very tight and small circle of fans, usually kids, who stopped collecting it when they grew up). And our comics shops still work on very friendly time table - they open all week from 1000 to 2000.
Oh, and that reminded me - there is one big difference. Our comics shops works it tight link with local RPG games companies, and libraries, and geek stuff shops, so they also hold a lot of regular special events, like lectures on geek stuff, joint watching of famous movies, lectures on pen-&-paper table games, how to paint miniatures, etc, etc, etc. Even the smart high IQ stuff like analysis of famous poems and novels of post-modernists authors. XD And participating in those events can be useful - like, you can get a discount in some geek shop, or free/open sit on next table game gathering. So, they don't lock geeks and nerds in their own tight circles - they actually trying to connect them with each other, make them socialize more, read more and not just comics but real good books. Oh, and also they sell tickets to our local cons, and not just for those in our city but couple of neighboring too.
So, our comics shops are open pretty much all week through - except those special events days, which is usually on weekends, when they sometimes close an hour earlier, and even that is not for every event.
But all of that is also because surviving on their own is hard here - we already have one comics shop closed after only a couple of years of operating, and the current main one is moving almost every year (it's almost funny, this year they moved to a building that is just across their previous, and because its already a back alley, said building is mere meters away from the old spot).

kitsune0 Oct 17, 2020 8:28 PM
Eh, no, note that I said "our national", not "US". I'm from different country. +)
About stores - funny thing, but we don't have any specifically anime-manga-related. All we have are comics shops. Even though comics fandom is younger than anime-manga one here. But we do have some manga being sell in those comics shops, as well as some anime-related merch.
And people here mostly dislike any kind of uniform, so, of course, comics shops, being mostly geek-related, don't have any uniform. And those shops are usually quite small anyway, so it's almost always just one man (or woman), rarely two, sometimes with an owner being away from sight in storage room next to main.
I usually don't participate in conversation with another customers in those shops when it's about what to buy. First of all, they have a seller here, and he surely knew better about new releases (since it's, you know, localized versions, and I always read originals - or scanlations, when it's manga), and I consider it a violation to jump before the man responsible for business here. And second, it mostly young customers, they have pretty different tastes anyway, so highly likely they don't need my recommendations anyway. +)
But, of course, I love to talk with sellers in comics shops. XD

Oh, you added more while I was still answering? Well, I'll do the same then! XD
No, I don't think you could call that "narrow-minded". It's entertainment, you allowed to choose whatever the Hell you want, and this is how it should be.

kitsune0 Oct 17, 2020 5:36 PM
Well, there is a club on MAL for those older than 30. Also, one of my friends has a father figure (i.e. he is neither his biological father nor his legal guardian, but he basically was and still is his father by his role alone) who is an avid RPG player (you know, of old classic pen-&-paper type, with DM and rulebooks and char sheets, all that sweet stuff) and an avid anime watcher, so he's almost 60.
It's funny, on our local cosplay con, which started as anime con 12 years ago, there are still people every year who say something among the lines "wow, you know so much about anime, I'd never thought that I could met someone who's over 30 and watching anime", and I'm like - kiddo, who do you think was organizing all those anime/cosplay cons for about two decades - students? +)
Or that one time when I was speaking with my friend, and after we finished and he left, I've seen one of volunteers trying to as casually as he can walking towards me, and when he finally reaches me, he asked in a sotto voice:
- Hello. Excuse me, do you know that man that just went away?
Me:
- Yes, for sure.
- Are you friends?
- Yes, for a long time.
- Can you tell me - is he really that man who was writing for [our national short-lived but still very famous anime mag]?
Thing is - my friend has quite uncommon surname, and articles were signed in both first and last names (i.e. omitting only the middle part), so the chance of it being another man are so low that not worth even considering. Which was what I've said to that volunteer.
- Wow! Thank you! You know, he's our lecturer in uni, so I was wondering.
I almost asked him - did he know that all those buff hardened middle-aged guys with strings of silver in their hair, who are our own security, are also avid anime watchers and are here only for that reason because otherwise their charge quite a sum for their service? XD
Woops, sorry for a wall of text. Hope it was fun to read though.

LILYInDespair Sep 29, 2020 1:41 PM
XD I shall spread the disease as far as possible. I shall not ask for a cure. For I am too far gone. As for the studios, I have no clue mate. I just hope it is as well animated as that Hell Verse Movie :)