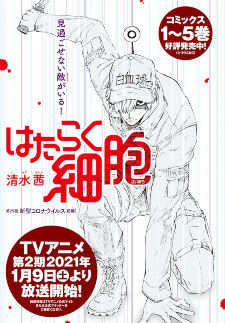 The February 2021 issue of Shounen Sirius revealed on Saturday that Akane Shimizu's Hataraku Saibou (Cells at Work!) manga will conclude in the magazine's March issue on January 26, 2021.

A 13-episode television anime adaptation by David Production aired in Summer 2018. A second season will premiere on January 9. Aniplex of America licensed the first season in North America and released it on home video in August 2019.

Hataraku Saibou placed seventh in the 2016 Kono Manga ga Sugoi! rankings and was nominated for the 42nd Kodansha Manga Awards in the shounen category in 2018. The manga and its spin-off have a cumulative 4.5 million copies in print.

Synopsis
Inside the human body, there are around thirty-seven billion cells, who diligently carry out their duties every day. New to her job, clumsy but cheerful Red Blood Cell AE3803 is excited to start delivering oxygen and collecting carbon dioxide despite her poor sense of direction. Meanwhile, White Blood Cell U-1146 is always ready to fight and kill any pathogen that he comes across. After running into each other multiple times, they quickly become good friends, regardless of their contrasting personalities.

Entertaining and educational, Hataraku Saibou follows the two blood cells and their many comrades as they work together to keep the body healthy. [Written by MAL Rewrite]

It's one of wholesome series. I will enjoy 2nd season.

It's a shame that great manga like these have to end so soon.

{Not like Shounen manga where it's the same old boring formula, just wash, rinse and repeat.)

First Bokuben ended before I even started reading it, and now this. Hopefully I don't forget to start reading this, I need to catch up before the manga ends.

My favorite manga ever! can’t wait for the final volume to be released in English.

Seven spin offs?! How does a series get that many spin-offs. I don't even think Naruto, Fairy Tail, or One Piece have that many. This is especially considering the series isn't even that long