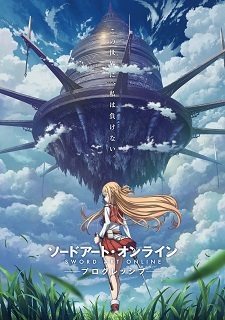 Synopsis
"There's no way to beat this game. The only difference is when and where you die..."

One month has passed since Akihiko Kayaba's deadly game began, and the body count continues to rise. Two thousand players are already dead.

Kirito and Asuna are two very different people, but they both desire to fight alone. Nonetheless, they find themselves drawn together to face challenges from both within and without. Given that the entire virtual world they now live in has been created as a deathtrap, the surviving players of Sword Art Online are starting to get desperate, and desperation makes them dangerous to loners like Kirito and Asuna. As it becomes clear that solitude equals suicide, will the two be able to overcome their differences to find the strength to believe in each other, and in so doing survive?

Sword Art Online: Progressive is a new version of the Sword Art Online tale that starts at the beginning of Kirito and Asuna's epic adventure—on the very first level of the deadly world of Aincrad! (Source: Yen Press)

Kawahara began penning the side story novel featuring illustrations by abec in October 2012, retelling and expanding the original series' Aincrad arc. Kadokawa published the sixth and latest volume in May 2018.

Kiseki Himura (Just Because!) began drawing a manga adaptation in Dengeki G's magazine in June 2013 before switching to Dengeki G's Comic the following April. The manga covered the first two volumes of the light novel and ended in February 2018. Kadokawa released the seventh and final volume in May 2018.

Yen Press licensed both the light novel and manga adaptation in English in 2014 and shipped the seventh manga volume in December 2018 and the sixth novel volume last July.

Of course its getting an anime.. Anything named SAO will get an anime at this point. Never liked anything about SAO.

Really excited for this! The main problem with the Aincrad Arc was the terrible and inconsistent pacing. If Progressive fixes this, this arc is gonna be pretty neat!

Can't believe we are getting a SAO reboot before a Tokyo Ghoul reboot.

Wait can someone confirm something for me. Is it safe to say that SAO will be continuing for at least another decade or so?

More of the first arc? Alright I guess... Wish there were more GGO though.

Can't wait to see the floors they skipped, and the actual progression of Kirito and Asuna knowing each other

I cannot wait! It would be interesting what adventures they go on each floor.

Im still bitter at how they wrecked the first season of Alicization.
Anyways I know Ill watch this in the end so whatever.

Really can't wait! I know a lot of people do not care for SAO at all but as my first anime it's not just something I've ever been able to not enjoy even despite its flaws. Revisiting the first arc from a new perspective and with some retcons after 8 years of being a weeb is honestly something I'm really looking forward too. Say what you will about it, I expect people to complain, but that isn't gonna stop me from enjoying it the fullest.

Hmmm, interesting. I really hope this will be something like the 1/4 of the first season.

Not a big fan of sao but I will watch it for some reason.

Unless its less "Harem" I'm not bothering with it. I loved the first arc of season one, but once second arc hit an big boob cousin or whatever she was became the main focus it killed it for me. Having her an almost every girl show interest in a guy who can't tell them to bug off since he is taken was hard to watch. Loved the series till that point since Asuna quickly became my fave. Just a shame what happened to it basically.

Cybergiara said:
How can you get hyped for this? It's as if you forgot kirito being the mc isn't the only bad part about SAO

But HE IS the protagonist of this one as well...


Given that at the moment there's only six volumes i think thats a safe bet. Though the chances of this being a placeholder until the arc is finished is also a possibility. Though that will depend on Reki's goal for that series because if he intends to create a tale that will show how the whole of aincrad was conquered then that will take time.

Guess we just have to see

Though given that the arc itself isn't finished yet i doubt it will be anytime soon.
Still after seeing how much Reki has grown as an author via the Alicization arc it will be nice to see him bring his skills to expanding upon the arc that started the franchise off.

All things considered, I doubt they'll try to adapt the whole arc, but rather do bits and pieces of it. I made another reply to someone else, but to summarize that

I think they'll either adapt 2 volumes a year in 12 episodes or 4 volumes every other year in 24 episodes, likely stopping once they start to catch up, and adapting a spin off of some sort

Though given that the arc itself isn't finished yet i doubt it will be anytime soon.
Still after seeing how much Reki has grown as an author via the Alicization arc it will be nice to see him bring his skills to expanding upon the arc that started the franchise off.

All things considered, I doubt they'll try to adapt the whole arc, but rather do bits and pieces of it. I made another reply to someone else, but to summarize that

I think they'll either adapt 2 volumes a year in 12 episodes or 4 volumes every other year in 24 episodes, likely stopping once they start to catch up, and adapting a spin off of some sort

ashleourke20 said:
I can not wait for this, but I wonder how long will it go and how many episodes can they get out of 6 books, either way will be fun just wish I knew when it is coming.

SAO with exception of the first season of Alicization, has generally gotten half a cour(roughly 6 episodes) out of each volume.

Progressive is also still ongoing, and it seems like it's going slow, so I'd predict that they would either do a yearly cour for a bit or do 2 cours every other before filling time with another spin off when they get too close to running out of material.

I don't have ANY sources, but to me this seems like a likely outcome based my observations, so take this with a grain of salt

JChap_97 said:
Is this like the dbz kai of SAO?

The writer basically went back and started writing Aincrad floor by floor, using the improvements he's made to his writing over the years