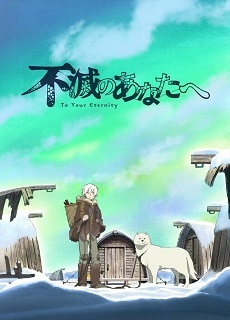 A television anime adaptation of Yoshitoki Ooima's Fumetsu no Anata e (To Your Eternity) manga was announced by Kodansha on Thursday. The anime series will premiere on the NHK-E station in October 2020. A teaser visual was also revealed (pictured).

Synopsis
It, a mysterious immortal being, is sent to the Earth with no emotions nor identity. However, It is able to take the shape of those around that have a strong impetus.

At first, It is a sphere. Then, It imitates the form of a rock. As the temperature drops and snow falls atop the moss, It inherits the moss. When an injured, lone wolf comes limping by and lays down to die, It takes on the form of the animal. Finally, It gains consciousness and begins to traverse the empty tundra until It meets a boy.

The boy lives alone in a ghost town, which the adults abandoned long ago in search of paradise said to exist far beyond the endless sea of white tundra. However, their efforts were for naught, and now the boy is in a critical state.

Acquiring the form of the boy, It sets off on a never-ending journey, in search of new experiences, places, and people. [Written by MAL Rewrite]

Kodansha Comics licensed the manga in English in 2017 and simulpublishes new chapters with the Japanese release. The 11th volume went on sale on December 17.

Fumetsu no Anata e won the 43rd Kodansha Manga Awards in the Shounen division along with 5-toubun no Hanayome (The Quintessential Quintuplets). The manga was also nominated for the 11th Manga Taisho Awards last March.

OH NO IMMA HAVE TO CRY AGAIN

I really like this manga and I think that an adaptation could be fantastic. However, the studio needs to be just right for this one. Fingers crossed it turns out great!

Seems interesting i'm gonna give this a go.

NanbaJeanOtus said:
New Golden Kamuy? I hope so.
Don't get wrong expectation. It's not historical action show with realistic story, but tale of immortal entity in ancient times, that can take form of dead beings.

I think Fushi will be voiced by Hayami Saori just like she voiced Nishimiya Shouko. My wish would have been either Ghibli or KyoAni animating this. I don't think others studios would be able to handle it well. But I know it's just wishful thinking at this point. Particularly because of what happened to KyoAni last year. :(

Looks like a good story i'm looking forward to to this one.

I remember reading few chapters a long time ago, but stopped for some unknown reason ... might give the anime a chance

i've seen this manga around and i've been meaning to read it, but if it's getting an anime i'll just wait until it comes out :)

This is interesting. I'll definitely check this out!

While I do think the last couple of arcs have been somewhat weak (at least compared to the beginning), I do think that this series is a strong contender for being one of the better ones coming out that season. Hopefully it'll have a good studio to back it up.

I'm so happy and scared. I hope the anime would be able to capture the story and experience like the manga. I'm not expecting them to do a fantastic job but I just want them to make us cry like how we cried in he first few chapters. Let them capture what made ppl read the manga for long and also let anime watchers connect with the story. Anyway, let's wait and see. I'm so excited anyway 🤗

Never heard of this before, but it sounds very interesting.

I was just thinking to marathon the crap out of the manga... still going to do it, but this is nice news.

VyseLegendaire said:
So Anime saved yet again come October? Damn its going to be hard surviving the death of anime the first 9 months of this year.

Great news, hopefully it gets a solid adaptation.

i know people say this every year, but 2020 really does look like a absolutely insane year for anime.

I've been hearing lots of good things about this manga and I have been meaning to read it for a long time. Glad it's getting an anime. Hopefully it falls into hands of good studio and staff.

I’M FUCKING HYPED FOR THE FIRST THREE ARCS, THOSE ONES WERE SO GOOD

Holy shit it's happening, I hope the studio doing this doesn't fuck it up, it can be AOTS