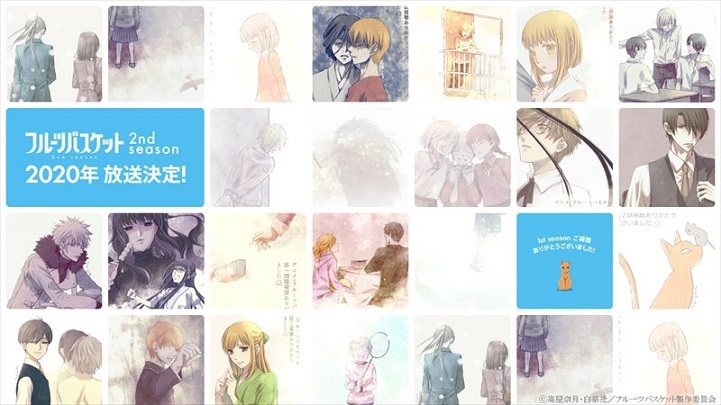 The 25th and final episode of the new Fruits Basket anime's first season ended with an announcement on Saturday that its second season will debut in 2020. The official website revealed two additional cast members.

Fruits Basket adapts Natsuki Takaya's supernatural shoujo manga of the same title, which ran in Hana to Yume magazine between 1998 and 2006. Takaya launched the Fruits Basket: Another sequel manga in September 2015 and ended it in December 2018.

The new television anime began airing on April 6. Crunchyroll and Funimation streamed the show with subtitles and in English dub, respectively. Funimation also licensed the anime series for home video rights and plans to release the first 13 episodes on Blu-ray and DVD on November 19.

A special event for the anime will be held on October 19. The voice cast members will appear at the event for a talk show and recital drama.

@tsubasalover, Spring 2020 would be freakin' awesome!

@tsubasalover, Spring 2020 would be freakin' awesome!

The second half of the manga was so much better. I can only see this coming season in the range of 8.4-8.5 considering MAL's rating system. But wait for the final season (yet to be announced.) Could well reach 8.8-9.

Nice. Looking forward to it.

I expect three seasons myself. But I'm ready for season 2, things are gonna get heavy.

In other words, water is wet.

I'm looking forward to it. There's a rumor that the series will be 63 or something episodes so perhaps there may be more to come after the next season. I hope it air Spring 2020.

Probably the only time I'll say this for a sequel announcement: "well yeah, no shit"

It's already announced to have a complete adaptation, plus the newest season's labeled as 1st season. And it obviously couldn't air anything later than 2020. So, pretty pointless news XD

Ah finally! They didn't give any details about the second season, so I even started to worry.

It was known from the start that another season would air, but I'm glad it is at the worst, going to air in 1 year from now (which isn't so long).

I hope we have the release date announcement on 19th October ><

I'm so excited for season 2! I can't wait! I loved this first season so much.

curious as to when, I'm very much looking foreword to more as I liked the first season alot more than I expected, especially when I barely recall much of 2001 for what I assumed was cause it was just alright but also partially cause its just been a long time

Lets hope that it'll air in the first half of the next year.

Glad this got announced as soon as it did. The sooner I can have this wholesome show back in my life, the better. It was such a nice break from the dark and grim Shounens that are everywhere.

Season 2, we're waiting for your arrival.

Lmao Machi and Edelgard have the same voice.