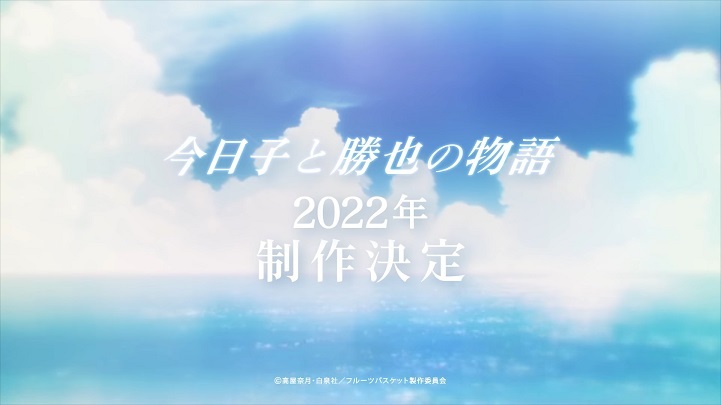 The 13th and final episode of Fruits Basket: The Final, the third and final season of the anime series, announced a new anime titled Kyouko to Katsuya no Monogatari (The Story of Kyouko and Katsuya) following its broadcast on Tuesday. The anime will debut in 2022.

The side story anime will adapt chapters from volume 16 of the original manga, centering on Kyouko and Katsuya—parents of the female protagonist Tohru Honda. Miyuki Sawashiro (Noragami) and Yoshimasa Hosoya (Bungou Stray Dogs) will are reprising their roles as Kyouko and Katsuya, respectively.

Fruits Basket adapts Natsuki Takaya's supernatural shoujo manga, which ran in Hana to Yume magazine from 1998 to 2006. Takaya serialized the Fruits Basket: Another sequel manga between September 2015 and December 2018.

Kyouko to Katsuya no Monogatari on MAL

Why do we need this. I would be so much happier if we got Fruits basket: Another. This anime would just be a disaster, hopefully they change the story a little bit so that it doesn’t seem like grooming or pedophilia. Instead of making kyouko in middle school, if they made her a high school student and then she met katsuya, that would honestly make it much better.

TitanInsane said:
alicerox07789 said:
Why do you think it won’t be well received ?

I wasn't talking about its critical reception, just about how people are not going to be happy about this little project showcasing a relationship between a minor and her teacher.

I would like to correct that part : Katsuya was not (and never was) Kyôko's teacher. For once, she rarely went to school and was afraid to enter a simple classroom because she thought she'll never fit in. She said herself that she met him "by chance".
Plus, Katsuya was only a pupil teacher (basically a student himself, albeit way older than Kyôko). ;)

BTW, in Japan, Kyôko had reach the age of consent when they met (and there is no sex between them before a long time).

Am I the only one who is not interested in the story? I would have preferred a little reunion like sequel where we catch up with the Sohma’s in a few years. Or they could just adapt Fruits Basket Another. The only prequel that I would be interested is one that centers around the older Sohmas, Ayame, Shigure, and Hotari when they were growing up. My fear is that this 2022 anime will not be a success and they won’t consider doing something else.

I thought that another version will get anime adaptation.
Sadly enough, but that's okay

excited for some fruits basket content outside the main series!

TitanInsane said:
alicerox07789 said:
Why do you think it won’t be well received ?

I wasn't talking about its critical reception, just about how people are not going to be happy about this little project showcasing a relationship between a minor and her teacher.

For some reason a lot of shojo’s from 90s etc have something like that not sure about nowadays though. The creators really must have a thing for it

I will not complain but I'd have preferred to see more of other characters, like Momiji or Yuki.

RobertBobert said:
In that case, how about Another? I really liked the Souma twins.

By the way, they didn't cover about the incident with Kakeru's GF and Tohru in the anime right? Or I just missed that part.. hmmm 🤔

Now I understand why they removed Kyoko's back story from the anime. Honestly, they could have kept it in season 3 by adding two or three additional episodes exploring her backstory. There was enough detail in the manga without going overboard, so I'm concerned they may just add unnecessary stuff to pad it out. Let us wait and see.

So this is where Tohru's parents adaptation from the manga was removed from the main anime, to its own eventual anime/OVA/movie which is still canon to the FruBa source material.

Not complaining though for the reason why their many chapters are worth its own standoff series.

@iva- have you heard about this?

I was literally crying while watching this Commemorative Movie!! It's like they're bidding farewells from the story. The Again instrumental was heart-breaking. I can't.... the feels T_T

Best news today! So excited for this 😍

Hype is real. This is gonna be like Higehiro's story but shining the brightest

Never read the manga, but from these comments it seems there's an age gap. Personally I don't care at all about age gaps if handled properly, so this is a non-issue for me. Excited to watch this.

z00nex said:
alicerox07789 said:
Why do you think it won’t be well received ?
age gap romance according to what people said above

The whole Fruit Basket is essentially a hymn to the author's age gap fetish, lol.

I was a bit sad seeing they skipped their story, but this announcement made my day better!
Can't wait for it. Now i have hope for Furuba Another to be adapted too at some point too.

In that case, how about Another? I really liked the Souma twins.