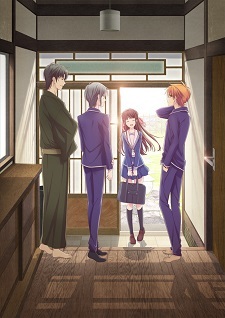 This year's 24th issue of Hakusensha's Hana to Yume magazine announced a new anime adaptation of Natsuki Takaya's supernatural shoujo manga Fruits Basket on Tuesday, scheduled to air on TV Tokyo in 2019. The new anime will adapt the manga series in its entirety. Avex Entertainment also opened an official website for the series simultaneously, revealing new staff, cast, and a teaser visual (pictured).

The anime announcement was originally revealed through Hana to Yume's listing of the issue's cover on November 12. The magazine promptly removed the listing and issued a statement on its official Twitter the following day that reads, "Please wait for the official announcement regarding Fruits Basket's media adaptation on November 20."

Synopsis
Tooru Honda is an orphan with nowhere to go but a tent in the woods, until the Souma family takes her in. However, the Souma family is no ordinary family, and they hide a grave secret: when they are hugged by someone of the opposite gender, they turn into animals from the Chinese Zodiac!

Now, Tooru must help Kyou and Yuki Souma hide their curse from their classmates, as well as her friends Arisa Uotani and Megumi Hanajima. As she is drawn further into the mysterious world of the Soumas, she meets more of the family, forging friendships along the way.

But this curse has caused much suffering; it has broken many Soumas. Despite this, Tooru may just be able to heal their hearts and soothe their souls. [Written by MAL Rewrite]

North American anime distributor Funimation also announced in a press release on Monday that it has licensed the new anime for both streaming and home video rights.

Fruits Basket was published in Hana to Yume magazine between 1998 and 2006 and compiled into 23 volumes. Hakusensha later reprinted the series in 12 omnibus volumes in 2015-2016. Takaya began serializing the Fruits Basket: Another sequel manga in Hana LaLa online web magazine in September 2015, which later moved to the Manga Park website last August. The manga is expected to end in the next chapter, with one-shots planned for subsequent release. The second volume went on sale last September, with the third and final volume scheduled for release at a later date. According to Hakusensha, Fruits Basket has sold a cumulative 30 million copies of its compiled volumes worldwide. The sequel manga currently has 340,000 copies of the first two volumes in circulation.

Studio Deen produced a 26-episode anime series in Summer 2001, adapting the first six volumes and the earlier chapters of the seventh volume. Funimation released the anime in North America on four DVD volumes in 2002-2003 and later on Blu-ray last August.

Tokyopop originally published the manga in English from 2004-2009 and Ultimate Editions beginning 2007, combining two sequential volumes in a single hard-cover volume. Yen Press relicensed the series in 2015 and published it in 12 omnibus volumes between June 2016 and April 2017, matching Hakusensha's collector's editions.


It looks so beautiful. I can't wait.

The new “Fruits Basket” anime will premiere in April 2019 This is hype, a promise to adapt all of the manga.. hope it won't be rushed though. Now I am torn whether I should watch the older anime first or not.. I'm pretty excited they're finally remaking this thing. At least this time they won't mess up Akito, and we'll finally get to see the characters they cut from the original anime. XD

Yuuichi Nakamura will be a really good Shigure... he's usually cast in more serious roles, but he's great while playing goofs too (e.g. Ringo in Utapri). Shimazaki's Yuki shouldn't be too bad either, though I'm not sure about Uchida as Kyo. I'm not familiar enough with his voice to form an opinion yet.

...I'm going to miss Kazuhiko Inoue as Hatori. They better get a good voice for him (I'd be the happiest fangirl in the world if it was Kenji Hamada). And Haru better be just as good at switching between White Haru and Black Haru as Akio Suyama was. XD

nicethings said:
I've been waiting for 84 years
NOW WHERES MY FULL ADAPTION OF THE KARE KANO MANGA THAT BETTER BE NEXT YA HEAR

Yo tell me about it! But we got a remake here so that's step one I think. And it's gonna be so shiny!

nicethings said:
I've been waiting for 84 years
NOW WHERES MY FULL ADAPTION OF THE KARE KANO MANGA THAT BETTER BE NEXT YA HEAR
Yes please. With all the retro manga adaptations announced recently, it might just actually happen.

they really have absolutely no idea what they're doing. wow.

Hmm, I was never the biggest FB fan, but will check out the first episode.

Part of me is excited. I know fans have waited over a decade for this.

OTOH...a lot of recent adaptions of older anime skip so much content in order to fit everything into 26 episode, and I'm scared that'll happen again.

HMMM i'm lowkey excited for this :o
i think it's going to be good tbh

This is so exciting! Will Funimation get the original cast?? I hope so! I really want the original English dub cast to reprise their roles.

It's been on my to-read for ages but I'm really happy it's going to get another life with this adaptation. Naturally, the complete story makes this a compelling reason to watch too. I hope they're prepared to do the story justice.

Always been a little bit interested in this manga/anime, so it receiving a remake, with full story, animation and everything sounds great. Think I wait until it is completely finished though.

Prepare for a ramble!

YES! I know I'm going to get some hate for this, but I grew up with the dub. It had a really great balance between comedy and heartfelt FRIENDSHIP TIME! Tohru Honda surpassed just about every other female protagonist in my book. She was always nice in a way that didn't seem fake, and her friends were there to support her when it came down to it. She is sincere, none of that sarcastic passive-aggressive nonsense.

It was an overall well done show. If they just continued the episodes after the original season, i'd be happy. They covered the first third last time in 26 episodes, so I hope they don't rush it and try to cram it down into something too short.