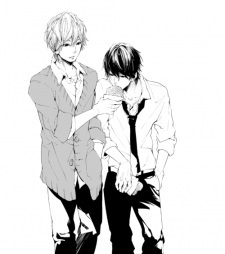 I am a representative of the Anime Family Community club as of recently we have become active again and would love to invite new people from every nook and cranny of this world :)

Fario-P Oct 20, 11:28 AM
oh wait no i remember you, i just made a thread and you posted on it! thanks for your support i'll reply to it in a moment! it's nice to meet you Luis

Fario-P Oct 19, 12:55 AM
Hello! I appreciate the request, but who are you and how did you find me? I hope you have a nice day regardless!

I kind of wish he reappeared at some point. He was interesting and had reasons to be evil.

Me too. I think I would have loved more Digimon 2 if the Digieggs did not forget that fast after the main team defeated Ken. To be honest, I enjoyed a lot the first episodes of Digimon Adventure 2, but in my opinion, it went downhill after a while.
I remember reading that there were several fans angry with the finale about the kids now adults watching their children being the new DigiDestined.

Don´t worry, I understand. Yolei had her moments but was too over the top at some points with her mannerism, and Cody did not have that much development in my opinion. I can understand perfectly well if Mimi was hated during her season, but I have a soft spot for her. I still remember how she was rotting Lillymon to defeat DarkTyranomon.

By the way, What is your opinion about Digimon Tri? I would like to hear it from another person. I did enjoy several episodes, especially the reboot one. But, I think the finale was too rushed and left many things to interpretation. Overall, I liked it because my favorite cast is forever going to be the original one.

I get it. Don´t worry though, good luck with your illustration.

I liked that it was based on the story of a real gay person and his struggle throughout his life in order to accept himself, come out and never give up. I think it would be an amazing movie if a studio is brave enough to pick it up to adapt it. A good ending for it could be the real-life pictures posted at the end of the manga and some words of encouragement. Plus, it could also be a way to thank the author for his work and to show LGBT couples that there are more alternatives than just marriage.

Hazbyn Sep 11, 11:33 AM
Apocalymon was only two episodes and was one of the strongest villains. I love him.

I once heard a CD drama in which the DigiDestined from Digimon 2 interchanged their Digieggs and the Digimon´s evolved into different forms. Moreover, the kids from Digimon 1 received their specific Digieggs and evolved too. I think it was an interesting concept that was not further developed in the anime.
I liked that Ken was the first ever human villain in Digimon, and he did a good job at earning people´s hate. His redeeming arc was nicely done in my opinion. Davis was indeed a more childish version of Tai, and his crush on Kari was annoying, but he was still a mentally strong character. He was the only one who did not fall into Malomyotismon trick and also helped his friends to recover.
But Yolei and Cody were crybabies in my opinion. In the first series Mimi, TK, and Kari were the youngest ones, and they never mentally break down as much and as frequently as Yolei and Cody.

I liked that in Tamers the many DigiDestined received their own story arc; even if it was short-lived, it was still enjoyable.

Hahaha, I just cannot think of anyone, aside from Iwaizumi, who can take Oikawa´s speedo to annoy him.
It is not possible to upload it here on MAL?

By the way, I just finished the manga Until I meet my husband. I wanted to see if the authors had more similar manga, and I found your comment in Ryousuke Nanasaki's profile. He had a sad childhood, but I am glad he was able to meet someone with whom he could spend his life.

Myotismon arc and the final battle against Apocalymon are the episodes I tend to re-watch the most. Using your words, I love how dark and imposing Apocalymon was in his short appearance; plus, he single-handled the DigiDestined in a matter of seconds. His self-destruction attack being stopped by the kid's digivices always gets me; that ost is beautiful.

I wished they explored the Digieggs a lot more by interchanging them with one another; that would have been interesting to see. I was cool with Ken, his redemption arc had a good pace and I liked Wormmon, he was cute. I don´t understand why people hated Davis so much; he could have been a little obnoxious at times, but he had several strong moments. He was mentally one of the strongest, such as in the battle against MaloMyotismon. But, Cody and Yolei were so prone to breakdowns that it was annoying. Plus, Cody was boring and Yolei's only trade was having a crush on Ken.
I don´t remember the explanation as to why there were so many DigiDestined around the world.

I liked the main trio. I loved that in the first seasons there were many protagonists, but I liked how well-balanced the Tamer´s trio were; moreover, their Digimon and their respective digievolutions were cool. In Frontier, I kind of enjoyed the digispirit concept, but I did not like that it was not further developed along the Ten Legendary Warriors.

I mean that I think of Oikawa as someone clumsy. Just like in the commercial, he would jump into the pool and his swimsuit would come off without anyone else pulling it off. I just think that because of all the fanarts I have seen on Instagram hahaha.

That is going to be funny, upload to see it please hahaha.

Hazbyn Aug 29, 9:03 PM
This is going to be long, so I apologized beforehand hahaha.

Yes, I used to love Digimon a lot as a child. From time to time I tend to re-watch the first season; my favorite moments were when the Digimon reach the final evolution by using the crests, and the overall Myotismon arc was my favorite storyline since the backstory of Gatomon was deep and emotional. Finally, that fight against Apocalymon is easily top 10 greatest final battles in any anime.
I did enjoy the Digieggs on Digimon Adventure 2; it was my favorite part of that season. But, I hated the DNA digivolution, I did not like any of the designs. I always thought some stories weren´t finished and I confirmed it after reading somewhere that there were actually several ideas that were omitted or never finished. Finally, I truly and wholeheartedly hated Yolei and Cody, they were so emotionally weak in comparison with the rest of the kids from both series.
I can´t remember too much about Digimon Tamers, but I enjoyed how chaotic it was. It was an amazing combination of shounen and horror.
Digimon Frontier was not my best-loved show since I was used to the kids having a partner, but all and all I liked the season. Except for how Takuya and Kouji received more evolutions than the rest of the cast; I always hated that favoritism in all the Digimon series.

Aside from the ones above I haven´t watched any others, though I now remembered that I left Digimon Adventure 2020 without finishing it. I am currently watching Digimon Ghost Game, I lowkey like it.

I watch the commercial. It was funny. I think it was a situation that Oikawa can do to mock Kageyama, or that it can happen to Oikawa without another person interfering.
Which couple are you choosing for your video? I would like to watch any of them animated.

Hazbyn Aug 24, 7:50 PM
Right, you are from Brazil. I have met several people from South America here. The anime movies don´t arrive where you live?? That sucks, although I don´t usually go to the cinema here either, it is a bit far.

I already vote in the poll. I have seen several fanarts in which Oikawa teases Kageyama, and even though I would like to see Kageyama getting revenge on Oikawa, I think it is more real if Oikawa steals Kageyama´s speedo hahaha. I vote for Haruki stealing Uenoyama´s though, it would be funny to see that in an omake hahaha.

I think I will add it to my plan-to-read list.

But honestly, I am hating more all those bots appearing on manga and anime sites more. They appeared out of nowhere and cannot be more annoying. Although, thanks to them I learned that HTTPS is the correct one and HTTP is a virus.

Hazbyn Aug 22, 1:19 PM
I am from Chile. If the movies of Evangelion and Jujutsu Kaisen arrived, then I think there is a chance for Haikyuu too.

Yes, I missed some episodes from the beginning, and then I forget where I was left.

I have seen that it is really sweet and endearing, I am going to watch the anime one of these days. I deeply hate when I am going to read a BL manga and several idiots are making homophobic remarks in the comment section. I took some time to check on them, and their favorite manga to read are the Harem ones hahaha.

Hazbyn Aug 18, 10:44 PM
I hope for the final Haikyuu movies to arrive in my country. If that happens, I will be the first person in line to buy a ticket.

I remember I watched the anime of Banana Fish when it first aired, but I missed an episode and forgot in which episode I left. I think it was in an episode when they visited the house of a man's ex-wife, and he reunited with his kid. If I am not wrong, that was right after the episode of Ash's childhood.

I want to read several mangas, but my current plan to read list is already too big, hahaha; Although, I am interested in Yagate Kimi ni Naru because I have not read so much Shoujo Ai manga. I think the only yuri manga I have read is Pieta.

Hazbyn Aug 13, 8:52 PM
I get you. I also would like to add more names to my favorites. I have been thinking about changing some anime, manga, and characters. But I love all of them.

From your wall, I love Haikyuu, Ao no Flag (I Hope some day gets an adaptation), Nakamura-kun, Love me for who I am, and Shimanami Tasogare.
I especially love Haikyuu; I watched it because of the pandemic and came to treasure the anime a lot.

Hazbyn Aug 13, 4:43 PM
Hello, thank you for accepting my friend request. It is a pleasure to meet you :)
I love several of your favorites in the anime and manga section.