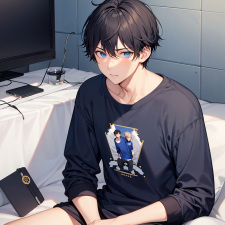 Astroli May 2, 3:03 PM
Of course!
Yes, I was going to mention that... It is pretty tricky, I might just be able to get the hang of it!
My friend is currently learning the language and sends me GIFS in the language, hehe

Astroli May 2, 2:47 PM
Lol yeah,
Glad you do! :D I should probably learn some, It would be easier to connect with most of my family.
German is a beautiful language, it would be awesome to learn. :3

Astroli May 1, 2:25 PM
Oh, I only fluently speak 1 language, that is English...
Although I can understand some Spanish, my family is from El Salvador. :]

Astroli May 1, 2:19 PM
Glad you like it too ;D
Oooh lucky, I'd love to speak 2 languages >,< Buying manga is definitely an investment haha

Astroli May 1, 2:11 PM
Oh, I see!
Given is really good, one of my first and favorite Mangas! Personally, I like the given manga better, some scenes feel more impassioned and heart-felt.
I have a few volumes and it's definitely something you might want to check out if you're a fan of Given <3

Astroli May 1, 1:01 PM
:D
Ooh yeah I think I heard of that! I will check it out :3
I plan to read Kimi wa Natsu no Naka, It looks fun!
In that case, if you haven't already, you should read Sasaki to Miyano... It also has an anime!

Astroli May 1, 12:45 PM
Awh, yeah, gotta love the softies haha,
Oooh interesting, I want to start Tokyo Revengers again soon... Classroom of the elite looks cool O:
Yess, Blue Period is really good, you should read the manga if you have time, It's really good!

Limoncito02 Apr 17, 10:47 AM
Hahaha, that anime have a los of funny and out of context moments too XD
All Comments