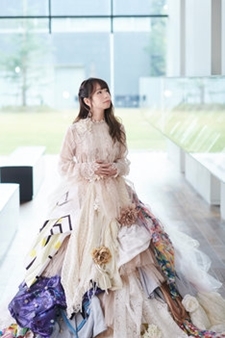 According to her official website, Japanese singer Nagi Yanagi announced that she is married to a man not from the industry. Yanagi will continue her music activities with no change in her production environment and thanked her fans for their continued support.

Initially known as "nagi," Yanagi was supercell's guest vocalist from 2009 to 2011, with Bakemonogatari's ending theme song "Kimi no Shiranai Monogatari" as one of her popular records. She has since performed theme songs for multiple anime series including Amnesia, Yahari Ore no Seishun Love Comedy wa Machigatteiru., Nagi no Asu kara, and Just Because!. She also voiced the character Aion from Norn9: Norn+Nonet.

Hope they go stargazing together.

Congratulations!!
Her song from Amnesia anime is the first song I heard from her and love her songs to this day.

oh I'm so happy read the news
happy marriage for nagi yanagi. i love all her song💖

My congratulations! I wonder if she had yuri fanboys, like many other Japanese female celebrities.

Oh my God! I thought she was already married though, so it's actually a surprise, but in a different way. lol

Congratulationsto my musical Goddess, I wish her a very happy and successful marriage! <3

Im happy for her. I never knew she 9 years older than me

Congratulations!
Her songs are my favorite!

Congratulation! I really love your song from Black Bullet

Congratulations and I wish you a Happy Married Life!

I’m looking forward to seeing more of her involvement with the anime industry!