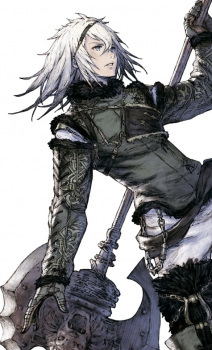 Eterrath Apr 22, 10:04 AM
Hello! I hope you're doing well. You have a great profile. The messy bio makes me feel right at home except mine's a real slog to read. But I stand with you on many topics including subjectivity in art as well as your viewpoint on friendships. I'm just getting started but I'd also like to start voicing my own thoughts about the media I consume as well so you doing just that through not solid reviews but... how to put it... a more personalized environment for discourse is impressive and inspiring.

TinyTabun Apr 22, 7:22 AM
Your profile is fun to read! Sometimes I want to write that much but I get shy about oversharing. I'm INFP too. Not very special though. I like to draw a lot. And I love Super Mario Odyssey, I used to play many more games but now I mostly casually play on my switch. And I've never played Nights into dreams but it looks really cool.

coffeedrops Mar 7, 10:10 PM
Hello again! Your roulette fella here (after an eternity)
Macross was a great experience; character development, music and the wackiness were my favourite parts & it was quite easy to get into without being much of a mecha watcher.
Hope you don’t mind the huge wall of text below :3


I have to say that I thought the show was a joke at the beginning. The inconsistent animation & art is amusing, VAs in the first half sounded a bit forced with laughs & screams (but they improved!), & the aliens made for some hilarious scenes.

Not much seemed to happen in the first 6 eps besides Hikaru repeatedly being shot down. His senpai goes to the effort of salvaging his prized jet then right away he takes his girl for a ride & smashes it. At this point, I was certain that he’d be an absolute dud.

Every relaxing moment is interrupted by an enemy attack, kind of like Team Rocket striking every ep except they’re after the ship. The repetitive battle scenes do drag out the episodes and throw off the pacing but I feel it was a good way to maintain the atmosphere.

Towards the latter half of the series I came to love the character development! It's by far my favourite part about the series. Hikaru & Hayase were developed very well and realistically. Hikaru especially is constantly reflecting and moving forwards, he’s moody at times and admirable at others, as soon as he gets the hang of things & becomes OP, he's thrown back into the dark and beaten down again. His handling of defeat takes him far beyond the usual punching bag chara which makes him interesting and likeable despite being such an imperfect character (and he has to deal with getting unintentionally flexed on by Max all the time kek).

The way they snuck in recaps was genius – Global's perspective also filled in the holes on the enemies & mechanics behind the ship & Hikaru's nightmare marked another personal development. The movie (Hikaru’s dream #2 as I like to think of it) brought some much awaited backstory on the universe. The director definitely knows which areas needed work and delivered. I'm guessing the supervision army backstory will be covered in another sequel?

The ending was also quite nice. Min got a dose of her own medicine which I was waiting for lol, she's been nothing but fickle & self-serving. However, picking Hayase would mean losing his integrity so staying loyal but letting Min leave was the best conclusion imo. Min finally deciding to think for herself again redeemed her chara and ended on a good note.

Thoughts on the movie: It felt like a different series from the first few minutes, the aliens had a much more menacing makeover, they even had their own languages and surprisingly, English wasn’t Engrish. The fight sequences were buttery smooth, though it seems like they ran out of budget partway when the character design returns to the familiar one of the TV series (which I actually liked more). The insert was strangely familiar/nostalgic…
Flash Back was a cute extra. These songs will be stuck in my head for a while!

Last of all, thanks for the rec! Above 24 eps and mecha is close to the furthest thing from what I’d usually watch but I enjoyed it a lot :D
Quietly ticks “dump an essay on a someone’s profile” off the bingo sheet

I just wanted to say, most of the forum posts Ive seen from you [before and after you became a moderator], really resonated with me and I feel as if I can always relate to them lol, I love your mindsets and perspectives, you're probably amongst the best forum posters imo, at least in CD.

For example, I remember your reply on the thread about relationships, and the one titled "do you want kids" ....these are just the ones i can think of from the top of my head. I love your mindset about not being obsessed with romance or relationships and the fact that there's so much more to life. When it comes to relationships in general, I feel like I prefer friendships, since you would be less "trapped", for a lack of a better word, with the other person, as in if things go awry you can end the relationship much easier. I don't like it when people treat romantic relationships as a joke, like its either you stay away from them or put a realistic amount of effort into them are the healthy choices in my opinion, which is why I dislike hook-up culture as well, it just so many consequences for the individual and society as a whole.
Regarding kids, I feel like people who always complain about kids and hating them is a pretty bad sign, perhaps it shows that they have a short temper/ pessimists/ selfish ect. I dont know if I necessarily love kids, but i definitely don't hate them, I think im more someone who acknowledges the challenges they can put you through but also the positives, I think my occasional annoyance of kids comes from the thought that they could have been taught/brought up better. I do want kids at some point, but I really want it to be a smart decision and something that I take very seriously, I want to be really mindful about the whole thing.

I also hate nihilism, I wouldn't necessarily call myself an optimist, but of course nihilism is on another level compared to pessimism, the idea of it is just so silly that I feel whoever believes in it has other underlying metal health issues, its just destructive. The thing is, you don't even have to believe in a religion or a higher power to feel that life isn't meaningless. Life and humans are just so complex and we go through so much, on top of that people express their feelings and experiences through several forms of art, to call all of that meaningless is just pathetic and borderline disrespectful lol. Idk an awful lot about nihilists but, its possible that some them assign themselves this belief because they want some kind of justification for their immoral acts or evading their responsibilities. But in the end, no matter how much you try to run away from them they will catch up to you, your nature as a human just can't maintain this type of belief (without serious consequences at least). In a fantasy world, part of (most/all of) us wishes we could just ditch out responsibilities, but in reality that just makes things worse. In your opinion what do most people like this lack? perhaps its the courage to face them and get through their anxiety, yeah I feel like that's the main reason.

I feel like you totally deserve and suit the moderator role, so im glad you are one. You just seem really reasonable and grounded ^_^
Im curious to know what you think of MAL's forum rules? and what led up to you becoming a mod

NoM_1412 Feb 12, 1:37 AM
I love dr.slump! Its hilarious definitely one of toriyamas underrated masterpieces lol

akaisama_ Feb 5, 12:04 PM
i like ur manga favourites too. Solanin, Dorhedoro and One Piece are rlly good

Nice :D What season were you last watching?
Who's your fav digimon?

Clavipra Jan 30, 4:54 AM
Thanks a lot for the great information.
All Comments