'Nanatsu no Taizai Movie' to Premiere in August 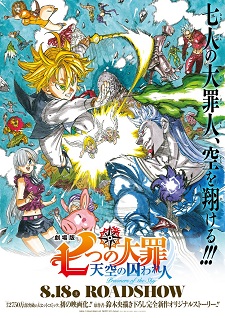 The official website for the previously announced Nanatsu no Taizai Movie has launched and announced that it will premiere in Japanese theaters on August 18 this year. Titled Tenkuu no Torawarebito (Prisoners of the Sky), the movie will feature an original story written by mangaka Nakaba Suzuki. With a slight change in staff members as listed below, Keigo Sasaki will return as the chief animation director as well as character designer and Hiroyuki Sawano will compose music for the movie at A-1 Pictures.

Synopsis
To celebrate the king's birthday, the seven sins go out to hunt for sky fish, a phantom ingredient. Meliodas and Hawk have gotten flown at the Sky Castle, a place that exists above the clouds. Residents of the Sky Castle, the Winged People, mistake Meliodas as a wanted criminal and he subsequently gets thrown into a jail. During Meliodas' time at the Sky Castle, the Winged People are organizing an important ritual to prevent the awakening of an ancient beast that happens every 3,000 years. A demon army lead by Belrion come to jeopardize the ritual and threaten the lives of the Winged People. In order to protect them, the seven sins face the group of demons and fight.

AVRY8 said:
I need to catch up so I can watch this.

you dont have to worry, its an original story, so i dont think its canon, or it wont have any impact on the main story

Oh okay that makes it a lot better then :3

Escanor is going to be in this so excited about that for sure. Hope they keep the music top quality too.

thats like the fourth director working on a nanatsu anime, jesus.

I hope this movie will be good. I can't wait to watch it ...

the director is doing a good job so far on killing bites.

AVRY8 said:
I need to catch up so I can watch this.

you dont have to worry, its an original story, so i dont think its canon, or it wont have any impact on the main story

I need to catch up so I can watch this.

That shit reminds me of Skypiea arc

The synopsis sounds silly, but I'll wait with the judgement until the movie comes out.