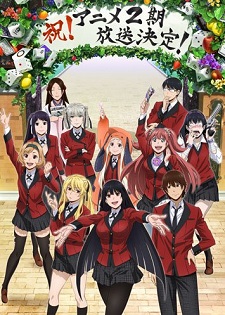 A second season of the Kakegurui (Kakegurui: Compulsive Gambler) anime series was announced at the "Hyakkaou Private Academy Cultural Festival" special event on Saturday, which was hosted by the video content planning and production company Avex Pictures. More details will be revealed at a later date.

Drawn by Homura Kawamoto and Tooru Naomura, Kakegurui began its serialization in Gangan Joker in March 2014. The magazine has also been serializing the series' prequel manga by Katsura Saiki as well as Taku Kawamura's 4-koma spin-off since September 2015 and December 2016, respectively. A third spin-off manga drawn by Yuuichi Hiiragi, which focuses on the character Midari Ikishima and her past, has been serialized in Manga UP magazine since February 2017. The ninth volume of Kakegurui, the sixth volume of Saiki's prequel manga, the third volume of Kawamura's 4-koma spin-off, and the second volume of Hiiragi's Kakegurui Midari spin-off manga are all scheduled for a January 27 release.

The manga inspired a 12-episode TV anime by studio MAPPA in Summer 2017, which concluded with an anime-original story. A live-action TV series adaptation is set to premiere on MBS' "Doramaism" (Dramaism) programming block on January 14.

Netflix streamed the anime series in Japan and plans to stream it outside of Japan this year. Yen Press licensed the manga for North American release and published the third compiled volume in November 2017.

There was so much build up, but the ending of the season 1 didn't affect any characters. I really like the concept of gambling in anime, but they gotta tell us more about the background of Yumeko and Suzui. Even after watching all 12 episodes I know nothing about the background of Yumeko, Suzui, and the prez. It's making too much progression into the story without letting us know anything behind them. What's the point? But I still really like the art style, the intensity, and the characters. I think it still can potentially be really good depending on how they do on the second season.

kind of surprised it got another season. Season one shocked a lot of fans and grabbed their attention but series wasn't any good, aside from the crazy faces which had gotten plenty obnoxious in the latter half of the series, it's just an asspull animu.

thebrentinator24 said:
So even after an anime-original ending they still went ahead and greenlit a second season? What the hell was the original ending for then? Whatever, I'll go ahead and watch for more mindless entertainment.

Yea it seems the Anime original ending was because they were almost positive they were not getting a second season, and now there's an announcement so soon for S2.

I'm not mad I liked the first season for what it was and will enjoy seeing more gambling induced ahegaos in the second season.

I didn't think there would be a second season to this. I'll still watch though

I thought season 1 was complete garbage but I’ll watch season 2 I guess, maybe it will get a little better.

Unexpected indeed, flawned but still fun to watch was the first season, so second one is alrighty for me~~

Hopefully Yumeko and Ryota relationship grows stronger in this season than the last. I am REALLY looking forward toward this season and it's development.

I actually liked the first season (not counting the ending), so I will be watching.

"One in Six........a one and six chance" saying over and over again (Click) pulling the trigger (HAAAAAAA, AHHHAAAAA, HAAAA) Breathing deeply and fast (Tick) pulled the trigger, no bullet, "WHAAAAAAAA,HAAAAA, WHAAAAAA, EHEEEEE!!!!!!!" Whaling loudly, "THIS, THIS IT IT!!!!""HERE RIGHT NOW, I'M ALIVE!!!!!!!" "THIS SENSATION!" (Lick) licking the gun's barrel (Sqik, Sqik, Sqik) playing her pussy, and enjoying it "AMAZING!!!!" (Sqik, Sqik,Sqik) still playing her pussy and moaning wildly"

And people wonder/ surprised why this series got a second season!? ^_^ Great show. Cant wait

"One in Six........a one and six chance" saying over and over again (Click) pulling the trigger (HAAAAAAA, AHHHAAAAA, HAAAA) Breathing deeply and fast (Tick) pulled the trigger, no bullet, "WHAAAAAAAA,HAAAAA, WHAAAAAA, EHEEEEE!!!!!!!" Whaling loudly, "THIS, THIS IT IT!!!!""HERE RIGHT NOW, I'M ALIVE!!!!!!!" "THIS SENSATION!" (Lick) licking the gun's barrel (Sqik, Sqik, Sqik) playing her pussy, and enjoying it "AMAZING!!!!" (Sqik, Sqik,Sqik) still playing her pussy and moaning wildly"

Woah...They're ACTUALLY making a second season for this anime.
This anime was a complete disappointment (watched only first few episodes though).

Haven't read the manga but I did enjoy the first season. The ending, which I'm now learning is apparently something that didn't even happen in the manga, left me with a severe case of blue balls so I hope season two pulls out all the stops.

Really unexpected, but I'm quite happy with this news. The 1st season was okay.

yes, i'm excited for this!!

why tho like sure it was an enjoyable train wreck,
but for all the wrong reasons