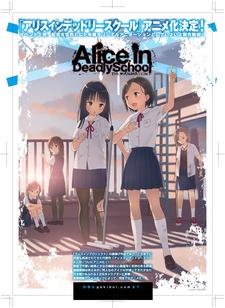 The official Twitter account for GekiDol has announced that Alice in Deadly School will receive an anime adaptation as part of the GekiDol project.

Alice in Deadly School is a 4-koma manga written by Kaouru Asakura and drawn by Ajiko Kojima. The series has been serialized in Dengeki Comics Daioh "g" magazine since 2013 and currently has one volume in print, released June of last year. The original character designs will be done by Asami Seikya.

The series is part of the GekiDol Project (Theater + Anime x Idol), which was announced to start in April during Winter Comiket 2015.

I'm hyped for this because the designs are so nice and a plot similar to Gakkou Gurashi but with those designs is meant to be really good.

BTW: You've spelled her name wrong in the summary. It's Sekiya not Seikya

and here i am, still waiting i am hero got adapted...

well check it first is not harmful anyways...

GakkouGurashi vol 2 ? Interesting, but a little too few details

Sounds interesting. I might give it a look see.

Hmm, might check this one out in all honesty, in the near future of course.

Don't they fight off zombies or something? I think I saw this earlier on ANN.

Edit: http://www.animenewsnetwork.com/news/2016-08-12/alice-in-project-reveals-school-zombie-survival-anime-title-visual/.105311
Yeah ANN says school zombie survival lolol. "The story begins with the peaceful daily life of schoolgirls — which suddenly breaks down when former schoolmates become zombies. The story follows the actions taken by the girls left behind on the school roof."

Didn't know it was a 4 koma though!

If Gakkou Gurashi taught me anything, it's that you should never assume it's your typical SoL-type anime just because there's cute girls on the cover.

so curious, i want some dark shit going on with that title

Robiiii said:
So many announcements lol
Sounds cool
well its c90 at the moment

I don't know how I feel about the 4-koma format, so this is probably an SoL rather than a horror anime.

I really hope it's a horror but at the same time I doubt it is...

hope is something dark

I was so excited seeing so many announcements, but none of them interest me :(

So many announcements lol
Sounds cool

So is this some Gakkou Gurashi-like stuff or just a super misleading title? o.o

So is there some horror elements to this? Is this a dark comedy?

Quite honestly I don't know. But its a 4-koma adaptation so I'll watch it.