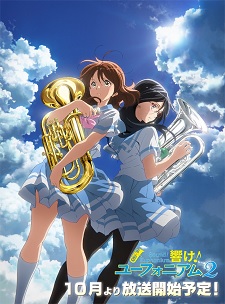 *Prays for some yuri*

I noticed Yamada is returning as episode director. That alone is making me think the series will turn out at least as great as the first season did. Also, it is interesting that we get focus onto some of the side characters from season 1 given the characters added on the official site.

This season is going to be really amazing. Can't wait.

Somehow i knew that ponytail girl (Nozomi) was going to be part of the cast.
Im and even now more super hype since I love pony tails.

Nice. I look forward to the second season!

nice! I like Tanezaki Atsumi's voice!
I'm excited either way.

My body could not be more ready.

But really, first season was great. The growth of Kumiko and the dynamic between her and Reina was just so... natural.

This visual is stunning! I can't wait for the sequel, the series got better towards the end.

Hell yea! Can't wait to see the band back together and let the yuri ship sail once again.

Anyway, I can't wait on a another fun-time with the Kitajuui-girls (especially Asuka-chan and Rena-chan)...xD

I'm really looking forward to this, so it's good to see some more news.

Also happy to see Tanezaki Atsumi get a role as one of the new characters.

WOOOOOOOOOOOOOOOOOOOOO. I went to a small anime convention in my town a few months ago and attended an AMV contest and one entry was Euphonium and I yelled out WOOOOOOOOO but I was the only person cause everyone else has shit tastes.

Anyways, can't wait! Bring on the movie too!!!