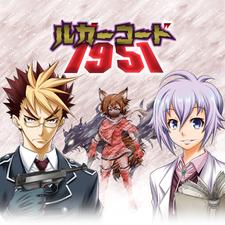 Shounen Jump+ has announced that the anime Luger Code 1951 will air on Animax in Fall 2016. It adapts the manga written by Haruto Haneki and drawn by Akira Akatsuki.

Luger Code 1951 is the Grand Prize winner of the Shounen Jump+ × Animax Anime Scenario Award, announced in September 2015. The theme of the contest was "your original scenario in the image of Shounen Jump." The contest accepted unpublished entries that could be made into a short anime 30 to 40 minutes in estimated length. Akatsuki was one of the judges in the competition.

Shounen Jump+ has been publishing Luger Code 1951 on its digital manga service since December. The third and final chapter was published today, February 29.

Synopsis
The story centers around the young linguistic genius and university professor Testa. He is introduced by his senior, Sergeant Rossa, to the Allied Cryptanalysis Department. There, he is tasked to break the enemy werewolves' code, which the werewolves are using to encrypt their radio transmissions. Testa is astounded, as the only sound the encrypted code produces is the howling of a wolf. His research yields no results, and he resolves to capture a live werewolf for better cryptanalysis. After exhausting all possible means, he finally finds a female werewolf, Yonaga.

Nidhoeggr said:
What's going on with DEEN this year?! Seriously, the quantity and diversity of their output is very surprising.
I'm kind of getting thrown off by them this year, rakugo alone pretty much redeemed themselves a ton for me.

Is DEEN seriously trying to get some kind of animation studio of the year award?

And another Deen work, that's good to hear.

Was hoping Gainax would take this since it's the same drawing style ala Medaka Box, guess not...

Good lord DEEN is pushing so hard this year, or they in debt or are they trying to get money to fund original content?

It's a short, I can deal with that.
The violet haired guy's design makes me want to kill him, so smug.

OVA only ? Or full length series ?

The story follows a young genius university professor who is able to learn any language. He is asked to decipher a code used in wireless communication: the Luger Code, developed by werewolves, enemies to mankind. Startled to find that he cannot decipher the code and desperate to study it, the professor embarks on a journey to capture a living werewolf to aid him.

Hahahhaha somehow this synopsis sounds more interesting.
The manga's got an 8, I intended on not even giving this anime a chance but I guess I can.

DEEN [I nor dislike them or like them too much] + unrecognizable manga??? = I ain't touchin' this

Director: Shinya Takahashi (Utawarerumono OVA)
It makes it look like he was directing that OVA but based on his track record it will be his first time as a director. Seems like he was doing only animation and design so far.

Scriptwriter is a mixed bag as well, I think I'll pass on that.

What's going on with DEEN this year?! Seriously, the quantity and diversity of their output is very surprising.

This sounds kind of strange. I can't say if I'd watch it at the moment, so I'll keep an eye out.

Wow,studio DEEN is pretty damn busy this year. Although this series is not really my type,so Ill skip this.

The premise sounds weird tbh. Eh, going to keep expectations low for now especially because of the studio though they have been producing some good series recently.

Stark700 said:
drawn by Akira Akatsuki.
So that's why it looks exactly like Medaka Box

Yahari, it's easier to catch a female werewolf in your original scenario in ShounenJump+ ...
:D

Thanks for the info, btw.