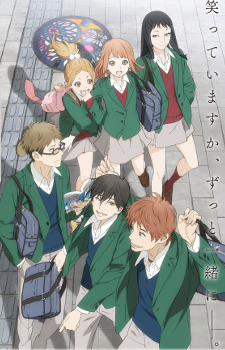 An official website has been launched, revealing that manga Orange will be receiving a TV anime adaptation scheduled to premiere for Summer 2016. A key visual and staff members were also revealed.

Synopsis
One day, Takamiya Naho receives a letter written to herself from ten years in the future. As Naho reads on, the letter recites the exact events of the day, including the transfer of a new student into her class named Naruse Kakeru.

The Naho from ten years later repeatedly states that she has many regrets, and she wants to fix these by making sure the Naho from the past can make the right decisions—especially regarding Kakeru. What's more shocking is that she discovers that ten years later, Kakeru will no longer be with them. Future Naho asks her to watch over him closely.

The manga series is drawn by Ichigo Takano and published from March 2012 to August 2015. After chapter 9 ran in Bessatsu Margaret in November 2012, the series went on hiatus for over a year. In 2013, the series switched publishers from Shueisha to Futabasha to republish the first two volumes. Starting from chapter 10, the serialization moved to Monthly Action in December. Previously, the series has also received a live-action film adaptation that was released on December 12, 2015.

Anybody have an idea on how many episodes this anime adaptation will have?

Never read the manga but heard really good things about it and announced for summer this year, very soon, one of the adaptions i am really looking forward to, not 100% sure aboutnthe choice of studio but i shall watch it.

I CAN'T WAIT I'M SO EXCITEDDD

Looks interesting. Looking forward to it

I'm really excited for this, especially because I just finished the manga! #Orange For The Win

First time hearing about this, but it seems to have all my favourite genres. :3 I think I'm definitely going to read the manga soon before the anime comes out. Super psyched!

AHHHH THE TEARS ARE BACK

Awesome! I was going to read the manga but i'll wait for this instead :]

I've heard a lot of hype behind the series over the past years, can't wait to watch the anime! It looks like it could be really really and I mean really good. Hope it doesn't disappoint.

Cheers for another shoujo anime adaptation!
*Still patiently waiting for High School Debut anime that will never ever come*

Been waiting for this! Now it's time for some feel trip.

Best news in a while. Can't wait

Wow, that's great! I already finished the manga and looking forward for the adaptation.

I wonder if they'll cast Tsuchiya Tao as Naho, since she also played that role in the live action movie and now has some experience in voice acting from BokuMachi.