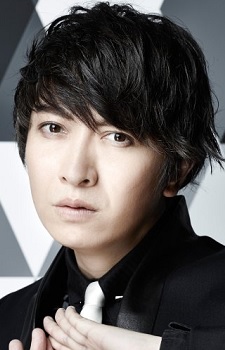 Seiyuu Daisuke Ono announced on Monday that he has left the Mausu Promotion talent agency, to which he has belonged since 2002. Moving forward, he will continue to work as a freelance seiyuu.

Ono has received four Seiyuu Awards in his career, twice as Best Actor in 2010 and 2015, once as Best Supporting Actor in 2008, and a radio personality award shared with Hiroshi Kamiya in 2015.

Doesn't this mean that he doesn't have to give part of his pay for roles to the agency? This should be a good thing for him. I wish him luck and lots of good roles in the future!!

Hope he will still stay active.

i love ono! i hope he made the right choice...i want to hear more of him! D:

he should totally go for fukujun's company but

freelance seiyuu huh
looks like more money for himself (getting ready for retirement, I guess) I hope not

i hope this is good news.

I almost had a heart attack when I saw him in the news feed. Thank heavens its not bad news. I expect that everything will continue to go well for him.

And now that Handa Sei is making a comeback to our screens in Handa-kun (kyaaaa!!! Too excited!!) I hope Ono senpai will still voice him. Handa in anime won't be Handa in anime without him.

Just keep coming back to do Sebby and it's all good!

Oh thank goodness! I thought, like many others, he was going to quit voice acting altogether. So glad that isn't the case!

Well, I hope he's successful as a freelancer! I'm rooting for you, Ono-san!

AntonKutovoi said:
thebrentinator24 said:
He should be fine. If I'm not mistaken, Takahiro Sakurai is also a freelancer and he seems to be doing just fine, so I have no worries about Ono's career........hopefully.
Nah, Sakurai is in Intention agency, along with Kenichi Suzumira and Nao Toyama.
I see. Never mind then.

Ono D is one if the most popular seiyuu so I don't think this will ruin his career at all. Well we'll see.

Keep doing what you do best, Ono-san! I love hearing his voice in anime.

I'm trying not to worry. Daisuke Hirakawa is a freelancer too and still getting more voicing jobs.

thebrentinator24 said:
He should be fine. If I'm not mistaken, Takahiro Sakurai is also a freelancer and he seems to be doing just fine, so I have no worries about Ono's career........hopefully.
Nah, Sakurai is in Intention agency, along with Kenichi Suzumira and Nao Toyama.

He should be fine. If I'm not mistaken, Takahiro Sakurai is also a freelancer and he seems to be doing just fine, so I have no worries about Ono's career........hopefully.

Omg !! :O
I was gonna passed away just now.. Thought he left ... Was quitting his career as a Voice Actor... :3
He can't, will never Quit... >.<
I hope he still continues being an awesome Voice Actor...
Love his voice.. need more animes with Main Character with his Voice ^_^
Omg!! Go Ono ♥

I just hope he continues voice acting and acting as main characters, absolutely loved his roles so far.

Got scared for a moment thinking he quit voice acting all together.
He is a popular seiyuu so i hope he'll do good as a freelancer :3

That was a bad move... The Japanese Illuminati are gonna get mad and ruin his career.

Oh, good. First I thought that he quit being a seiyuu, and would've cried. His voice is godly.