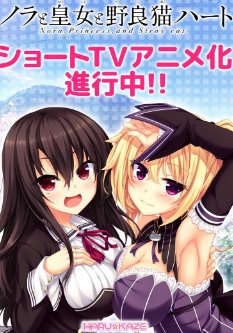 The game developer for the upcoming adult game Nora to Oujo to Noraneko Heart (Nora, Princess and Stray Cat), Harukaze, announced at Comiket 89 that the game will receive a short TV anime adaptation.

Synopsis
Nora Handa is a boy who lives with Shachi Yuuri, who was adopted by his mother. With everyone supporting, the two of them grew up healthily even after their parents passed away. Shachi, who likes Nora the most, wakes him up every morning.

Nora spends his happy student life with Michi Kuroki, who is a disciplinary committee, honor student at school and childhood friend of the main character, Yuuki Asuhara, who is a gal but is very bright and can talk his worries to, and more friends at school.

One day, Nora meets a girl who calls herself Patricia at the park on the way to the school. Patricia is a queen at hell, and claims to come here to destroy the life on land. However, she is damaged heavily because she touched the life for the first time, which the energy is stronger than her, so Nora needed to tend her. Patricia asked him to tell her about the mysteries of the life, and he had to even explain the ero book that found at the park...?! (Source: Amazon Japan)

Nora to Oujo to Noraneko Heart on MAL.

Non-hentai VN adapatation? Into the trash it goes.

Machination said:
You had me at the "Adult Game"

Yep. Definitely going to check it out lmao

I wonder if, this short will have some "juicy" action :P

Snow said:
Patricia asked him to tell her about the mysteries of the life, and he had to even explain the ero book that found at the park...?!
what? lOl. must watch!

Kinda eh, I dislike the artstyle and chara-designs, and it is a very important factor of visual novels.

its going to be 3 min

moodie said:
Tenshi_Shura said:
johnanime2015 said:
Bengon said:
Eroge adaptions are dumb. What's the point in watching the Anime if you don't even get to see the ero scenes like you would if you were playing the game. Even if the story is bad you can at least get "something out" of playing it...

(In fact, I think deleting hardcore sex scenes can actually greatly improve the stories of some eroges; those eroges would be good for TV anime adaptation.)

lmfao clearly u have no idea how big the market is
It's more like, the planets have to align at the same time Halley's comet passes through.

The synopsis looks okay to me. I will look forward to it!

Such quality content right there. Way to go Japan.