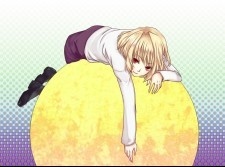 How does the whole Common Route/Heroine Routes/Moon and Terra Routes work? Is it Common until a certain point? Are there certain choices you need to avoid? Etc.

RabbytX Jun 9, 2014 6:33 AM
Hello Ketuekigami.I see you are a Type-Moon fan so I wanted to ask about an particular series and yes it is Tsukihime.Some call it the pinacel of Type-Moons works, and yet it never got the big light it could from various other series of tham given exempel the Fate series and Kara no Kyoukai.Still I got curious and wanted to ask if I should still read it or go for the visual novel and if you got the time explain why I might like it.Thx in advance!!!

Dark-Evolution Jun 19, 2013 3:43 PM
I just wanted to let you know that I'm planning to retire from MAL activeness fairly soon, Ketuekigami. The reason I'm doing this is I have certain life goals set up for myself and unfortunely being active at MAL is going to take up too much of my time. Even though I still do like anime, my passion for it is not the same as it once was.

I wanted to say that I have enjoyed our past discussions and it was nice to meet you at MAL. Hope you enjoy your times at life as much as I have. Farewell. Why would you just add some random person like me?....you are suspicious

Archaeon Feb 18, 2012 1:44 PM
Thanks for letting me know. That particular episode didn't quite fit the atmosphere of the show, and now that I know what should have happened, it makes sense as to why. It really shouldn't have been changed.

Flawfinder Feb 15, 2012 5:35 PM
Just read the other review. I agree with it for the most part, but the problem with smart dialogue in anime is that it doesn't reach me very well if it's not spoken in a language I understand. And unfortunately, I don't understand Japanese. Reading smart dialogue only works in a book. Anime-wise, it doesn't do much for me (again, unless it's Rider or Waver). Maybe if the series gets dubbed and the dub is good, I'll check the first half out again and see if I can appreciate the many, MANY dialogue scenes in this anime.

Flawfinder Feb 15, 2012 3:39 PM
My main problem with the dialogue is that the anime is practically all telling and very little showing. Very few scenes in the show followed the "show don't tell" method that visual mediums are supposed to use. Signature moves and stuff like Kiritsugu's magic-draining bullet need explanations. Stuff like an undodgable attack that somebody manages to dodge is not. Just illustrate the facial reaction. We can do a little interpretation. I don't need to listen to the fighter's thoughts every time they initiate an attack or get out of a sticky situation.

That's just me though. I prefer stuff like Samurai Champloo's fight scenes. I didn't need narration during that, because the action spoke for itself. Or how about that fight scene in CLANNAD AS's eighth episode? That isn't even a fighting anime and I thought that was one of the best animated fights I ever saw. The reason I was mostly indifferent to the fight scenes were because they kept on breaking the flow of the action by narrating every single chance they got.

With that said, I didn't hate the anime. I didn't even say it was bad. I just said I couldn't get invested into it as well as others. I even recommended the anime to people who didn't have my problem, and like you said earlier, this is the first half. Maybe the second half will change my mind, as I said in my review that I will see it. But a lot of the first half was really boring for me, so I can't rate it any more than average.

Flawfinder Feb 15, 2012 7:49 AM
I know it's about the characters. But the fact that I didn't care about any of them except for Waver and Rider, kind of hurts my opinion on that point. And the Saber v. Lancer fight was way too long and had too many pauses, talking heads, and those faraway shots. And while there was action in like half the episodes, there was a lot of boring dialogue even during those scenes (maybe I'll make that part more clear in the review).

Anyways, I know it's just the first half, and hopefully the second half will be better, but I'm just not really a fan of the Fate series.