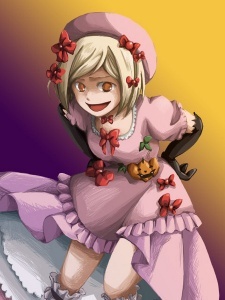 
naikou: "At the beginning of the series, Reinhard was my favorite, but then I slowly gravitated toward Yang. I started to enjoy the fact that he has a political philosophy that actually makes sense as opposed to Reinhard's somewhat insane way of doing things."

callmetheBigD Oct 24, 2012 7:40 PM
yea thats what i was thinking lol. i dont log on that much either but i noticed we had alot of the same tastes so i just thought id drop an add. nice to meet u!

YoungVagabond Oct 29, 2011 7:59 PM
I am indeed a fan of both Bale and "Oldboy", and it's probably a good casting decision. However, I have absolutely zero interest in watching the re-make.

Kind of like how I loved the "Tintin" comics as a kid, but couldn't care less about the upcoming cash grab.

Oh wow, Dlanor's voice is almost identical to the fan-made one.

DrewTheDude Jul 23, 2011 5:42 PM
I swear this movie looks like AVP trying to rip-off the The Thing. The fact that we already know what's going to happen makes it worse. Hell, I don't even think the Thing is all that well known with the youngsters today than it was back then. Still, I love watching things I predict will be trainwrecks so this movie still appeals to me in that regard.

As a kid growing up with TMNT, this shit looked so real! Even nowadays I think this looks better than most

Despite not having seen the movie myself, this also gives me nightmares. 1977 really set up the standards for Special effects it seems!

I think a lot of the new CGI stuff look kinda bad by comparison. Not to say animatronics have always looked great, I just find more charm in animatronics. Haha. Though there are definitely a lot of great looking movies that use CGI these days, like LoTR and Avatar even if the movie itself isn't always good.

Haven't been watching too many movies these days, though, honestly. The last movie I watched was the laughably shitty "Mazes & Monsters" mostly because of its ridiculous anti-D&D messages. The concept is almost as laughable as that Batman comic where he says that Rock & Roll is evil. It seems that nowadays I don't really care all that much about good movies. I generally feel more tempted to watch the ones that I know are horrid pieces of shit. Really, it's always been easier for me to talk about the stuff I hate than the stuff I like which is why, I guess, where I get my amusement from in these movies.

DrewTheDude Jul 14, 2011 11:00 PM
Saw the trailer for the new "The Thing" movie - why do the Hungarians all speak English and have plenty of flamethrowers? Why do they not seem to care much about dressing very warmly in sub arctic temperatures? Why do they have to show another scene with dogs in a cage trying to get out as they are assimilated? Why must this movie try as hard as it can to ride off of the good action parts of the first one without any of the psychological horror? WHY IS IT ALL GUNNA BE CGI AND NO ANIMATRONICS?

And a track from the novel:
http://www.youtube.com/watch?v=6OfDmCSksCo&feature=related

Another great sound novel
All Comments