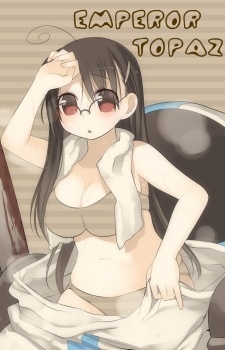 ZettaiRyouiki 23 minutes ago
I know but alas xD. Thanks! Us too, remember we don't have anime here though that's more racism so boo America worshipping xD. Cool getting it eventually, and have fun! Thanks xD. I did, and true for Aqua but Roxas is bad too! Aye while Castlevania 3 is actually a frigging prequel xD. Mario takes away Peach's golden statue Wario had rightfully stolen from Captain Syrup! Kaginado was much better this time xD.

Boo indeed! Aye, knew you would like that plus she had coke bottle glasses before and now wears normal ones xD. Awesome! Aye xD.

ZettaiRyouiki 5 hours ago
I concur xD. Probably because his series is popular, which it shouldn’t be but alas! Aye, go the meganekko and the ill girl xD. Exactly, poor kids suffering from boring parents! My bad, but indeed meant the silly game; you never got it so no worries for not knowing about it xD. Makes sense, first time in 1P mode I killed myself with the side special! Next time I won the whole thing xD. Aye since that happened a lot back then, and Super Castlevania IV is a remake of the first game America pretended instead was a sequel! Aye, only at the very end xD.

Certainly, that would be bad! Aye, as I even checked Akurasu THE biggest SRW info wiki and nothing xD. Right, though for SRW lolis you’d prefer Latooni now she was retconned to keep her glasses on! Of course xD. Indeed for Casual mode and sorry for explaining things too much! Also good luck with the next blog xD.

ZettaiRyouiki Yesterday, 7:18 AM
I concur there xD. Boo Issei being both a molester and a coward! Go the best pinks xD. Aye, boo parents hating fun! Not sure why Sora and that exactly is what I was referring to xD. Aye! Right plus Sora plays floaty, not very fun xD. Well, we got it too but I mean America came with it, like Super Castlevania 4! True though, Wario Land does have Mario but not playable xD.

Right for that would be weird! No worries, it's an obscure game xD. Aye for the sexy loli! It was funny xD. Right! Aye, thank you xD. Aye but only in Casual mode obviously! Awesome xD.

ZettaiRyouiki Oct 18, 9:37 PM
I call bollocks on this poll, for Yoshi's Island is a Yoshi game and not a Mario one despite the MURICA fake ass "World 2" branding; by that logic Wario Land 1 should be there because it's called Super Mario Land 3: Wario Land, even on Japan, but it isn't so boo the double standard :/.

ZettaiRyouiki Oct 18, 12:10 PM
I appreciate that xD. Exactly, or a manchild one like Issei! Aye though Setsuna and Kotoha are great Cures and have pink hair xD. Sitcom but no worries, and indeed as this doesn't even have stepincest! Aye so boo Kururun, Kuru Kuru Kururin is better xD. Poor girl and no worries! Also we're finally getting the last Smash character: Doomguy xD.

Makes sense, after all in the HD era companies usually want the player to see everything! That she did, she does in Endless Frontier too plus Alfimi in the sequel does too xD. I think you mentioned that back then, awesome! Makes sense, glad it's fine xD. Also only six chapters left! Aye though Awakening and beyond have Casual mode and 3H even lets Byleth fall in battle fine in that mode, and glad understood my poor explanation xD.

ZettaiRyouiki Oct 18, 7:11 AM
I apologize for being troublesome xD. Aye, boo traitors but indeed girl only series are often better! Exactly, no wonder Momo from TLR is sorta named after it xD. Aye, boo terrible episodes and indeed for being Tsubomi’s long nightmare, like that one show here I mentioned before! Well, Luvdisc is detrimental in that it takes the spot from something useful, but agreed xD. Great comparison, boo them! That it is fanart aside, and no worries as I’m the Maika fan anyway xD.

Certainly for that! Fair enough, there would be if this was an older game xD. No worries as PXZ takes Love from Endless Frontier which itself took it from older SRWs, but go remembering that! Cool you remembered that xD. Sorry if I shouldn’t have said that, but I wanted to make the joke so sorry :/. Luckily you can save any time, plus death isn’t permanent and it’s only game over if a battleship is destroyed! Or a character who has to do a plot sequence, like “On turn 2 Bob the bad guy appears finally and then Mike the hero fights him, then player resumes control” basically xD..

Right for that! Great joke xD. Of course, these games aren't mean! No worries but Love only healed in older games, now it gives the user several buffs xD. Boo Tusk indeed, and agreed for him getting laid and taunting Embryo with that! Speaking of which in X Embryo is the culprit for Buddy Complex and its entire plot, so if you didn't like it blame him xD. No wonder you get to kill 20 Embryos! Aye, it just takes longer xD.

ZettaiRyouiki Oct 17, 8:32 AM
I found TR unfunny, annoying, and lame, plus it was a Minori episode apparently so boo robbing her as Cure Kururun was deemed more important :/. PriMagi was cool though, Hina is like Mahiru and Maika the Aikatsu girls combined xD.

ZettaiRyouiki Oct 17, 7:12 AM
I sadly agree xD. Certainly, being fair Stall is boring but still! I meant that because I was comparing axes and Fighting types xD. Aye! Figured you’d understand, boo that indeed :/. Especially as the 00s were the Golden Age of Fanservice instead since most good shows started there! Aye, boo traps being gross and especially boo Astolfo who is Generic Le Trap yet is stupid popular for some reason :/. Aye, boo faggots! No offense xD.

Certainly for that, but these differences are bigger! Aye, poor Kahili xD. Fair enough, but luckily you get every regular unit regardless of path as said! Aye, Hilda even learns Love (the Spirit Command) xD. Also learned Tusk for no reason is the third most popular Cross Ange character in this site; boo MAL users being woman haters unless they are fat cows, violent man-haters, undeserved winners, or something else lame! Aye as you face more enemies and more bosses, luckily it’s not really that much harder at least in modern games xD. Aye! Right xD.

ZettaiRyouiki Oct 17, 6:59 AM
I apologize, but idiot thread of the day; in particular poster #6 should die in a car crash :/.

ZettaiRyouiki Oct 17, 12:24 AM
I realized the 10s were the Dark Ages of Fanservice, for the following reasons:

-The infamous Pantyshot Ban, which made buttshots nearly nonexistent and made series focus (even more) on breasts.
-Speaking of, the rise of horrible mamocentric franchises (Highschool DxD, Tawawa) only made this worse.
-Meanwhile clASSic series either nearly vanished (Ikkitousen, Queen's Blade) or became terrible (Strike Witches, To LOVE-Ru).
-Not helped by the appearance of anti-ass series people foolishly believed to be ass series (Keijo, Prison School), setting back ass discourse.
-Finally, traps became stupid popular (Astolfo, Hideri), even if they were often awful and single-handedly ruined their shows.

ZettaiRyouiki Oct 16, 12:05 PM
I blame idiots being the majority xD. Exactly, no wonder GF made the next games offense focused! Exactly, shame Kommo-o is the Fighting dragon and not Haxorus xD. That makes sense, nothing wrong with that though! Also Dai was good as usual xD.

Thwre are several Indeed, and go getting that right! Poor bird being illegal xD. Well, secrets are missble but that is every SRW game! Go understanding xD. True, but Hilda is still yuri for Ange! Aye for the assy sniper and Hayami looper, and they indeed are longer with more enemies xD. Aye as the game says so! Of course, it was good xD.

ZettaiRyouiki Oct 16, 7:15 AM
I have the feeling this YuYuYu season will lack the main cast mostly xD.

ZettaiRyouiki Oct 16, 7:15 AM
I concur though they’d need not to pander to idiots only either xD. Indeed! Aye since it’s one of the reasons it was so good in Gen 2 I think, along with Curse of course xD. Aye, but by Gen 5 they were one of the best types, kinda like FE Axes sucked back then but by the portable games they got stronger until being the best weapon type! These things happen xD.

Right for Ximena having good Spanish! Unlike Oosawa who is terrible and made me laugh xD. True for the taxi service Steel type, and Toucannon is cool too other than its generic type! Aye xD. The game says you get everyone eventually and this just means earlier recruitment, so don’t worry! If you mean the Chuuni Rikka skirt thing then yes, boo KyonyuuAni being terrible xD. Aye, figured you’d approve even if it’s mainly Ange and Salamandinay liking him and not Salia or Ersha! Speaking about getting close to the end, got Hina (Buddy Complex) and Yoko (TTGL) and have about a dozen chapters left and in route to the best ending so go me for that xD. Aye: there’s the original intro, J-Decker intro, Combattler V intro, and Gridman intro obviously; guess in the other route it’s another 3 series! Aye since it was pretty good xD.

ZettaiRyouiki Oct 15, 12:08 PM
I concur so boo that xD. True that, and boo artists! Aye, all Fighting types and Snorlax did xD. Aye! Awesome xD.

Thanks for that! Great pun, and go the emo hair bird xD. It is, and true that! Aye, shame xD. Aye for no Tamaki ass sadly! Aye for the name sharing, and true for Chuuni xD. Aye, the Cross Ange girls in X also like Wataru who is another show's young shota lead! Also finished the demo, the Gridman chapter was the last one in it xD.