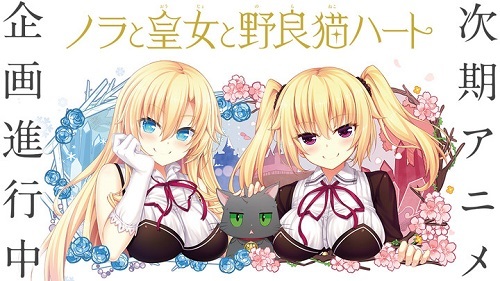 The official website for the Nora to Oujo to Noraneko Heart TV anime has announced that the franchise will get a sequel anime. The anime is planned to be distributed via the Comic Market 95 event, which takes places between December 29 and 31.

so, any more known news on the anime sequel, or is the game supposed to be the sequel? cause it seems like if there is no release/airing date after more than a year it would either be fake, cancelled or misunderstood news.

RIP for a bad release.

just so people know but the game is going to be release on steam https://store.steampowered.com/app/1010600/The_Princess_the_Stray_Cat_and_Matters_of_the_Heart/ no release date yet but i'm hoping for April at the latest

Something nobody asked for, but uh, ok.

I thought this was decent so, hey why not?

Happy to hear this, and go to hell sony.

Probably to promote the game.


ItsXolo said:
So is it not getting a broadcast? If so, I somehow doubt it's even gonna make it's way online at all.

It probably will, at least in raw format since we're talking about a Comiket release.

the literal GOAT is back

Oh yes, I want those goats.

Ecchi series getting a second season

The first season had some surprising ingenuity to it. Almost makes me what to play the game to see if it's there too.

I want to play that game...

So is it not getting a broadcast? If so, I somehow doubt it's even gonna make it's way online at all.

That was unexpected... I wonder if the animation will be even slightly better.