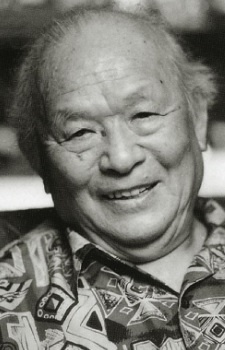 Mangaka Shigeru Mizuki, best known for his shounen horror manga GeGeGe no Kitarou, died Monday morning at a Tokyo hospital at the age of 93. NHK reports that Mizuki died from heart failure.

Mizuki was born in 1922 in Osaka and grew up in the port town of Sakaiminato in Tottori Prefecture. After completing elementary school, he learned how to draw while working as a newspaper delivery boy.

He was drafted into the Japanese army in 1943 and was sent to the Pacific during World War II. After being seriously injured during an air bombing at New Britain in Papua New Guinea, Mizuki had his left arm amputated. He was recovering at an Allied prisoner-of-war camp when the war ended and was repatriated in 1946.

After returning to Japan, Mizuki entered Musashino Art School in 1948 but did not graduate, eventually working odd jobs and with his family's business. He began drawing for picture story shows in 1957 and later debuted as a mangaka with Rocketman.

Aside from GeGeGe no Kitarou, his popular works include Akuma-kun. The two works established him an author in the shounen horror and supernatural genre, and they received several anime adaptations. Mizuki also drew Souin Gyokusai seyo! based on his wartime experiences, along with Gekiga Hitler.

In 1991, Mizuki received the Purple Ribbon from the Japanese government, an award given to individuals for their academic and artistic accomplishments. He was also named a Person of Cultural Merit in 2010 to recognize his outstanding cultural contributions.

Mizuki is survived by his wife of 54 years, author Nunoe Mura, and two daughters.

Why the hell am I only finding this out now...?

Thank you for everything, Mizuki. Rest in peace.

Been thinking what if there's a mangaka that only has one arm, then I saw this man. My condolences...

FakeMe said:
RIP. The news is very surprising. I used to watch Gegege no Kitaro when I was a kid.

Never heard of him but r.i.p.

RIP. The news is very surprising. I used to watch Gegege no Kitaro when I was a kid.

He was a very inspiring man, may he rest in peace

ichii_1 said:
Too bad he died before he got a chance to see the newest gegege adaptation :'(
R.I.P.
+1

Never forget when i always be in go home club to watch Gegege no kitarou when i'm still elementary student.

Too bad he died before he got a chance to see the newest gegege adaptation :'(
R.I.P.

May his soul rest in peace. He had an incredible life and created a great manga.

so many people in the anime/manga industry have been dying this year, there was the author of Inu x Boku SS a while back and a couple of seiyuus as well...

A huge loss. His works are a wonder.