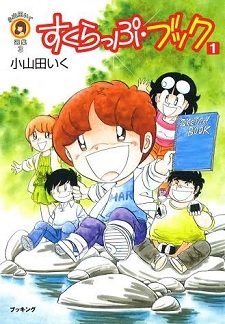 Mangaka Iku Oyamada has died at the age of 59. The artist best known for his 1980 manga Scrap Book was found dead in his home in Komoro, Nagano Prefecture, on March 23. Authorities said that Oyamada had been ill, but no further details on the cause of death was revealed.

Oyamada was the winner of the 4th Shougakukan Newcomer Comic Grand Prize with the work Bosatsu. He debuted as a mangaka in 1979 with Gohyaku Rakan, which was published under his real name Katsuhisa Tagami. Later that year, he took up the pen name Iku Oyamada when drawing the series 12-gatsu no Yui, which received an honorable mention in the 13th Weekly Shounen Champion Newcomer Manga Prize.

Between 1980 and 1982, Oyamada drew the slice-of-life manga Scrap Book (pictured), which follows middle schooler Haru Kashiwagi and is set in Oyamada's hometown of Komoro. The series was revived with a one-shot published in 2009 to commemorate the 40th anniversary of Weekly Shounen Champion.

Other works include the 1987 manga Marionette Shi, which focused on social and environmental issues through the eyes of a schoolboy. Oyamada also drew horror manga in the 1990s.

Don't know who he is, but rip.

Regardless of the circumstances, that sentence alone emits a vibe of loneliness that shoots right through the heart. Hopefully I'm misinterpreting it and he was living with his loved ones. May he rest in peace.

Never heard of him, but may he rest in peace.

59. A year from retirement.

this could be handy yeah? https://www.mangaupdates.com/authors.html?id=8303
nothing translated

I never heard of him but REST IN PIECE

R.I.P.
He should have continued with horror manga :'(

I don't know him, but may his soul rest in peace

It seems only 1 person in MAL actually read his work. I guess I have to make it 2. It's the only thing I can do for him.

RIP soon to be remembered by me.

I never read your work, but I think I'll go check them out.

Never heard of him but RIP.

Never read any of his works, may check them out