'Show By Rock!!' Gets Sequel and Short Anime 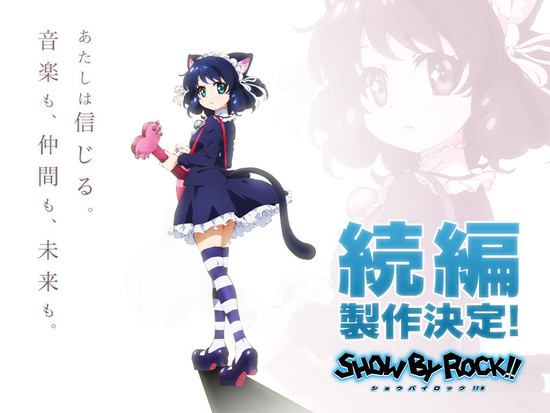 The official Twitter account for Show By Rock!! has announced that the series will receive a sequel, as well as a short anime. It was announced via the Show By Rock!! Event "Tsurezure naru Kuri Kuri Plasma♪Girls Band Festival! ~Miinna Daisuki Nyan♡~" that was held today. A key visual has also been posted along with the announcement with an official tagline, "I believe in music, my friends, and the future." More details including the broadcast information for both series will be announced at a later time.

The original series is based on a popular cell phone game made by Sanrio. The first season aired from April 5, 2015 to June 21, 2015 for a total of 12 episodes by studio Bones. The series was licensed by FUNimation in March.

Glad this and Starmyu are getting sequels but whatever happen to Bakumatsu Rock D: The way it ended it deserves a second season 2 to Japan !!

T-T awww! Dammit! They need to hurry up!

Hikaru_Koto_13 said:
Any new news on this? It's already June and I've yet to see any new episodes...Was it cancelled?

No. The shorts are set to start July 4th, and those will air BEFORE season 2. Nothing has been said on S2's release date yet.

Any new news on this? It's already June and I've yet to see any new episodes...Was it cancelled?

I was so happy when I heard it was getting a second season. It's one of my favorite series ever.

The only thing in this show I'd look forward to would be Shingancrimsonz-- they were to only reason that made me finish the first season.

Excited!
I'm not surprised because Show By Rock Is selling like cupcakes.

this was cute, it was my guilty pleasure for the season.
I can't imagine how they're gonna continue this though...

omfg!!! it is one of my fave Musical short anime!! I am so excited for S2!

dArKoPsYcHo said:
Dropped the first season so no thanks
Happy for the filthy casuals with shit taste
I never knew hardcore anime watching was a thing lmfao

Why do you people want a new DTB so badly, the 2nd season was a fucking travesty and is so shit it will doom any sequels off of it with its clusterfuck of a ending and raping of lore.
Maybe they want to remake it ? but yeah that sounds pretty impossible.
Just forget it, it's just my little hope.

Good News for the Series...I GUESS...

Awww yes ^^ this show was so cute! More Cyan and Rom ♥

What sort of drama will they display this time?

First season was terrible, I could barely sit through it. I suppose, this is a good news for the fans.

I'm in favor of this. I sure hope there will be a good reason why Cyan would need to be brought back to meet her friends again in MidiCity. This means more bands from the game could make their appearance here, huh?

Either way, I'm definitely looking forward to this sequel. :)


Although with Love Live, the manga was released in January 2012, the anime in January 2013, and the game in April 2013, so that doesn't really count considering the game didn't come first.

Love Live is originally a music video in 2010 before it gets manga/anime adaptation.