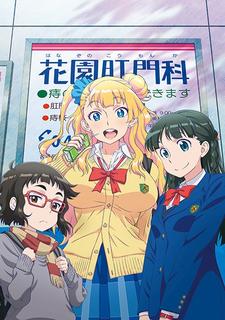 The official site revealed that a TV anime adaptation of Oshiete! Galko-chan (Please tell me! GALKO-chan) will premiere in Winter 2016.

The series is drawn by Kenya Suzuki. It was serialized in June 2014 by Comic Walker and currently has 60 ongoing chapters being published.

Synopsis
Follow the daily school life of Gyaruko-chan, Otako, and Ojyo in this series of comedic short stories. Gyaruko-chan has a tendency to speak rudely, but she's basically friends with everyone. Otako is the quiet loner of the class, but she is good friends with Gyaruko-chan. Ojyo speaks her mind freely and naturally. (Source: MangaHelpers)

I'll give it a shot. I mean, I don't have any other anime I could be watching at the moment, so I might as well watch this.

Also, the manga pages that I've seen have a lot of pink. I think it's a neat little twist (I like the small pleasures in life).

Probably will be watching this just for Oppai-chan.

Hongu said:
Never thought I'd see the day where people are offended at the mere sight of breasts.

Just people on MAL being their typical over-sensitive fucking retarded selves. Welcome to the neighborhood.

Not nearly an issue unique to this.

Cool, I will give it a try!

Her grotesque watermelon tits are literally larger than her fucking head. Get out of here. This looks trashy.

Hongu said:
Never thought I'd see the day where people are offended at the mere sight of breasts.
It's like you don't know how Americans are.

Most likely a short but the character design looks cute. Dem boobs though.

Never thought I'd see the day where people are offended at the mere sight of breasts.

Ugh that blonde
no ty

Ugh....Blonde girl's boobs turn me off.

I think I'll pass this one

I will watch it but it looks like something I will drop adter 2 episodes.

Directed by the same man who was behind SKET Dance? Now I'm mildly intersted.

The designs are doujin tier, it most likely is a short. It also reminds me of Gokujo.