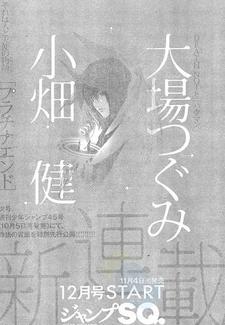 A scan of the upcoming 44th issue of Weekly Shounen Jump magazine, to be released on Monday, revealed that manga authors Tsugumi Ohba and Takeshi Obata, known for their work on Death Note and Bakuman., will start a new manga series titled Platinum End. The series will debut in the December issue of shounen magazine Jump SQ, officially releasing on November 4. A special feature will premiere the beginning of the story in the 45th issue of Weekly Shounen Jump magazine on October 5.

Obata has been publishing manga under Shueisha's Shounen Jump label since 1998, debuting with his first major title Hikaru no Go. The pairs' most notable works are Death Note, which ran from December 2003 to May 2005, and Bakuman., which ran from August 2008 to April 2012. Both series received TV anime adaptations in 2006 and 2010, respectively.

I loved Death Note and Bakuman.
I wll practically read anything by them now.

another masterpiece of work incoming.

this has my attention

Why monthly?! I don't think I can bear the suspense.. better to accumulate some chapters before reading T.T

Who would accept or deny an official second season of death note?

I love Death Note. I still need to check out Bakuman. Manga or anime, guys?

dont know why but the art for its cover image looks pretty fucking bad and dated lol, if I was told it was a one shot drawn by Obata back in 2002 I would have believe it

SinXtian said:
"This is a story of a human and an angel.

Death Note: "A story about a human and an shinigami"

Bakuman: "A story about 2 mangaka"

PolarKoala said:
Excuse me, but is creator of Bakuman a good credential? I've never seen the show and just assumed it was typical children stuff, like Pokemon. Is it actually good?
Well, it's nothing at all like Pokémon.
Many people think it's good/interesting (myself included), but that probably also comes down to what your taste is, you know. It's about a pair of guys who are becoming mangakas. It's quite different from Death Note.

The creators of Bakuman might be more famous for their other work, Death Note though, which I stalker-ishly saw that you've seen, and from my understanding liked?

They've also made a one-shot called "Skip! Yamada-kun", which I personally also thought was quite good.

I'd say that I'm expecting something good from them.

Excuse me, but is creator of Bakuman a good credential? I've never seen the show and just assumed it was typical children stuff, like Pokemon. Is it actually good?

Oh wow! That's awesome, can't wait to see what it's about! ⁼̴̶̤̀ω⁼̴̶̤́

The hype is real.

Anybody who's heard more specific info on it, besides it being from those geniuses, and about a human and an angel?

Name sounds really cool , and authors. I Hope this will be something good and new.

FireEmblemIke24 said:
why can't we get a full Otter 11 serialisation?
Because the one shot didn't do that well sadly. :/

Looking forward to this for sure, especially after reading the specials for Bakuman. Was wondering when their next work would come out.