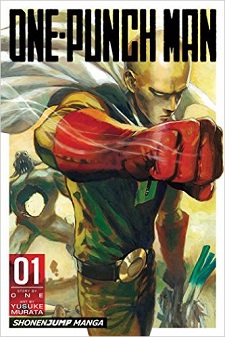 Seraph of the end still up

I think I'm a worthy opponent to one punch man. I simply don't get hit in the first place. :3

How long will it take until only one volume of OPM and Tokyo Ghoul make it into the top 10, sheesh. Anyway, I'm expecting OPM to end up as popular in America as Kill La Kill at best, I'm not sure what it would take for another anime to get the kind of popularity that AoT got nor am I sure OPM will end up at its level, but who knows?

IMO, OPM is officially going to be the next mainstream series.


HaXXspetten said:
Feels like I've seen this before
Now you will feel like this every week for the top two spots.

wow..I didn't believe before..but this shit actually can be as popular as AOT when the anime came out..
As popular as AOT? Too early to say but I highly doubt it. As popular as or more popular than Tokyo Ghoul? That sounds about right,... for now.

The interesting thing is that with this new big three of AOT, OPM and TG and other potential successes like BnHA, I think it's fair to say that Naruto's departure from the list won't be missed by anyone.

Honestly I can't see OPM being as popular as AOT for a few reasons. One the plot is pretty standard and lacks any mysterious vibe, like man this setting is pretty cool type of feeling. Second it lacks any tension which makes sense considering it's about a guy who wins every fight too easily. However that very reason is why I believe it won't be able to reach to the masses like AOT. Third is that I believe since OPM is a gag series it won't be able to get a far wide audience like AOT because imo the comedy gets stale after awhile. So yeah I definitely believe it won't be as popular as AOT.

The only thing I can see happening is the series getting as popular as Tokyo Ghoul, however time will tell but being a gag series and lacking any tension is what I believe will keep it from being as popular. Not saying it won't get popular because it will just not in the same league as AOT.

Also after listening to the Opening song for OPM's anime, yeah it won't be as big as Guren no Yumiya or Unravel. It's pretty shit, though I could be wrong since it's my opinion.

The interesting thing is that with this new big three of AOT, OPM and TG and other potential successes like BnHA, I think it's fair to say that Naruto's departure from the list won't be missed by anyone.

It's nice to see "The Ancient Magus' Bride" get some attention ^_^, I pre-ordered my copies of One-Punch Man to come in the mail...in November if I remember correctly.

Dang OPM, my pre-order's not even arriving until late October, I wonder how long it'll stay on the list.
I'm happy MonMusu is continuing the trend of being a bestseller.

yes yes yes finally Mahoutsukai no Yome ....oh god i was so heartbroken when i thought it was underrated....oh my heart is so so happy........10/10 recommended for all

One Punch Man and Tokyo Ghoul take up the top 4 spots. As expected.

Yea the war between OPM and TG will continue for quite some time that's for sure.

and i will try to read One-Punch Man

SnK vol 1 moving from #6 to not on the list at all this week is very strange. Even more strange is that vol 17 is still at the same spot.

I'm also glad to see Mahoutsukai no Yome (The Ancient Magus' Bride) on the top 5 this week. It also got a drama CD adaptation recently.