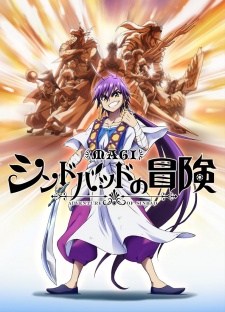 Shogakukan's web comic magazine Ura Sunday posted a trailer for the fifth Magi: Sinbad no Bouken OVA, which is scheduled to ship with the limited edition seventh volume of the manga on July 15. The fifth installment concludes the three-part Valefor dungeon arc, and a message from the editors of Shogakukan also indicated that this release concludes the current OVA series. However, the editors do not rule out the possibility of future announcements.

The OVA series is an adaptation of the Magi: Sinbad no Bouken manga, which in turn was spun off as a side story of Magi: The Labyrinth of Magic that focuses on Sinbad as the main character.

Good, i hope there's more in the future.

Final OVA for now? I do hope for more.

The more the merrier

It's worth finishing the valefor arc at least, more magi always good.

The 5th ova is previewd, yet their still isn't a good quality version with eng subs of the 4th yet :/

Good news although I think if they plan to adapt more Sinbad content in the future, it will just be in OVA format. Wouldn't mind another season of Magi in the next few years though.