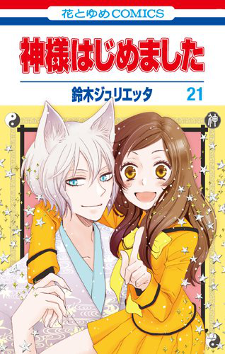 It was announced that a new OVA adaptation of manga Kamisama Hajimemashita is in production. The announcement was made on the official Twitter of shoujo magazine Hana to Yume. The OVA will be based on the "past arc" of the series, which ranged from the 14th to 17th volumes of the manga. The upcoming 21st volume of the manga, which will be released on April 20, will reveal more information about the OVA.

The series previously received a 13-episode TV adaptation that aired in Fall 2012. The second season, which completed at 12 episodes, aired in Winter 2015. A two-episode OVA was also adapted from the manga.

I'm a little bit worried about this. This arc would need at least 6 episodes, so it might be a bit rushed. I'm also a bit disappointing that Himemiko's arc isn't being adapted first since it's actually supposed to take place before the past arc.

There will be 2 OVAs? This is simply amazing.

Thank you for this. I'll surely wait for it!
I'll be seeing Tomoe again!

Nice! Look forward to hearing more details about the length of both. Thank you!

NUOOOOOO!!! THEY BETTER NOT SUPER CONDENSE IT!!!

This are such great news!!! Can't wait to see tomoe's past <3

The cover of that volume already tells me to keep far away from this OVA.

Wow, past arc!! I can't wait for it. Maybe they will even continue if it sells well. I hope they can adapt the whole arc without changing or removing anything.

The OAD will obviously be more than 22 minutes of airtime as compared to each of the season episodes, so I'm pretty sure they can do it un-rushed. Besides, they can have more than 1 episode of OAD with 46 mins.-almost 3 hours each. The Past Arc is about 20 chapters or more, and adapting 4 volumes would take longer—all in all an estimate of 5 hours of anime if they do it without omissions and rushing.

The Past Arc is the darkest and best arc of Kamisama, and I'm thrilled to see it animated. 😻 It's one of the arcs where it deviates from just being a "generic bubbly shoujo romance."

There's quite some violence and gore in this arc, so having it as an OAD...they can escape with no censoring on the bloody parts.

Huh, how are they going to fit that arc into an OVA? I can understand the marriage arc, but Tomoe's past?! Hopefully a cliffhanger ending and a season 3 announcement instead of rushing...

Anywayyy, glad to see it animated! ^.^

with this lovely news, we shouldnt wait for 3rd season like 2 years...cause manga still havent big arc like this arc yet...

Ohhh ohhh ohhhh that entire arc in an OVA?? I hope it's an OVA series like maybe two or three but even then, I'm a little worried. It's my favourite arc so I'm glad they're animating it but still, I really hope it's handled well...